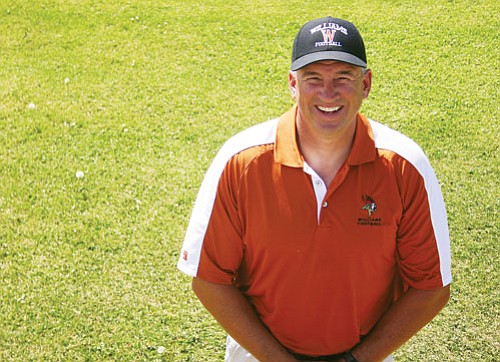 WILLIAMS - Jeff Brownlee is a well-known face to many in the Williams area, but not as coach of the Williams High School Vikings. But that title is indeed what he will become known in the coming months, as Brownlee takes over for former Vikes Coach Phillip Echeverria. Brownlee, 46, has lived in the Williams area since 1998, though he's lived in northern Arizona since 1988. Besides his job with the Arizona Highway Patrol, Brownlee has also been involved with youth football and junior high football.

"This is my first time coaching high school football," Brownlee said. "I originally got started in 1996, 1995 and coached a couple years of youth football in Flagstaff. I came to Williams and there was no (youth) football."

Brownlee soon got the youth football program going and even won a championship. He later went on to coach junior high football at WEMS.

"I was given the opportunity to coach high school football and I said yes," Brownlee said. "I was honored that I was even offered it. Most of the time you have to have some pretty good experience. I didn't have varsity experience, but I know the game pretty well and I have some great assistant coaches that help me: Jamie Mace, Johnny Hatcher and Jeff Dent. Johnny and Jeff were on the coaching staff from last year. I needed their experience and they're helping me as I'm learning."

Brownlee called high school football a "bigger, faster" game compared to other teams he has coached.

"The kids are still the same and this is what it's all about: kids," he said. "I bring tons of enthusiasm. Like I tell everyone, this is my NFL right here. This is probably as high as I'll go and I'm trying to give 110 percent to the program here, to the kids, as well as to the junior high and youth, if I can have a chance to talk to the kids."

Many players on the Vikings high school team, he said, were students he coached in junior high.

"It's the juniors that I kind of started with. The seniors I didn't really have the opportunity to coach with," Brownlee said. "I do remember coaching them, or playing against them, in baseball, but not football. From the juniors, I've been a part of these kids' youth football years and junior high."

When it comes to this season, the Vikes will once again move into the 2A division from the 1A.

"This year we're at 2A, which is 11-man football, which gives us the opportunity to put more players on the field, more talented players on the field," Brownlee said. "We have 52 kids out this year, which is one of the largest bunches ever. I talked to Coach Dent about it and he said it was one of the largest groups of kids he remembers. That's exciting to bring a whole bunch of kids on. The kids' skill level is great."

Cheerleading is also returning to football field this year, which Brownlee said will add a level of excitement to the games that had been lacking in the past.

"I think it goes with football," he said. "When you talk football, you think of the band and cheerleaders. Unfortunately we don't have band, but we do have cheerleaders and I know that bunch is real enthusiastic to get out here and cheer for us."

The Vikes played a scrimmage Aug. 21 at Ganado, a 3A school, and played Page, a 4A school, as well.

The Vikes will play their first non-conference game of the season Saturday against Fredonia. The game will be held at the Northern Arizona University Skydome beginning at 11 a.m. Though the Vikes will play mostly 11-man football this season, they will drop to an eight-man game Saturday in Flagstaff.

"We'll play 11-man offense against their 11-man on defense and then, when they have the ball, they'll have eight on offense and eight on defense, so we'll kind of have a little transition we have to work through there," Brownlee said. "The following week we'll play at Sedona and that will be 11-11 in another non-conference game. Right after that we start right in with our own conference."

Are you ready for some football?
Vikings get a jump on summer football program
Competition tough in Vikings' preseason practice as team transitions to 8-man
Williams High School Vikings knocked out of state playoffs
Vikings stay undefeated with 49-6 rout at Greyhills
Event Calendar