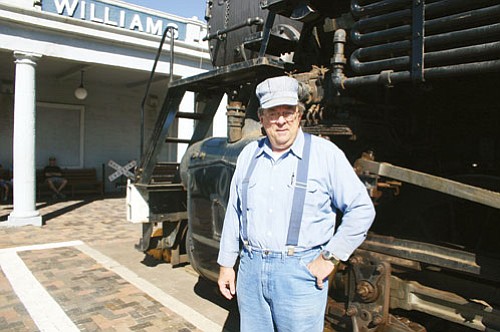 WILLIAMS - In honor of the Grand Canyon Railway's 20th anniversary, officials plan to offer a special run of the company's historic 4960 steam engine Sept. 19. What makes this trip interesting, however, is that the engine will be powered by waste vegetable oil. According to Sam Lanter, chief mechanical officer for the Railway, initial test runs have been positive for the Baldwin Locomotive Works engine, which was originally built in 1923. Lanter has been a railway employee for 11 years and chief mechanical officer for seven years.

"The 4960 is being brought out for running special trains. It's going to run Labor Day Weekend, some short 45 minute trains that will run out of Williams, the idea being to get the steam locomotive back in service with less of an environmental footprint," Lanter said. "It will be operating on waste vegetable oil instead of diesel fuel and heavy oils that we had burned in the past."

Lanter also explained how the steam engine will "burn" the vegetable oil.

"Being a steam locomotive, it's externally fired, so it's not as big a deal as converting a diesel. We're not actually burning bio-diesel, which is what most people think of when we talk about burning waste vegetable oil. Because it is externally fired, it's mostly a matter of having oil heaters on the locomotive and having the waste vegetable oil in a good condition so that we can light it off and burn it in our regular burner," Lanter said.

The waste vegetable oil, he said, comes from a number of sources, including the Grand Depot Café located on the Railway compound.

"We're getting it from a processing company called A Greener Day out of Phoenix, but it comes out of wherever, out of our cookers here at the restaurant, from the South Rim. It is waste vegetable oil. It's had French fries and egg rolls and whatever cooked in it. We're glad to get it and make this contribution to the environment," Lanter said.

"We ran out to where most people call 'The North

Besides steam engine trips, the 20th anniversary celebration will include live music, photo opportunities with the steam engine, a christening of the oil-powered engine prior to its inaugural run, a ribbon cutting and remarks from local dignitaries, officials said. The celebration is open to the public. Tickets for the train, which will be assisted by another locomotive, are currently available for purchase. Festivities are slated to begin at 9 a.m.

For more information on Grand Canyon Railway, visit their Web site at www.thetrain.com.