Steam engine to return for a special run Sept. 19 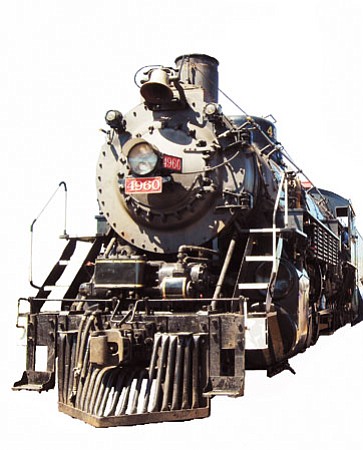 WILLIAMS, Ariz. - The Grand Canyon Railway will commemorate the 20th anniversary of its rebirth Sept. 19, with a special roundtrip run to the Grand Canyon of its Steam Locomotive 4960 fueled by recycled vegetable oil.

The Sept. 19 excursion for the Railway's regular 65-mile journey from Williams, Ariz. to the South Rim of Grand Canyon National Park and back to the Williams Depot departs Williams at 9:30 a.m. and arrives at the Grand Canyon Depot at 11:45 a.m. For the return trip the train departs the Grand Canyon at 3:30 p.m. and arrives in Williams at 5:45 p.m. The Railway's typical four classes of service will be used. Rates for adults range from $70 to $190, and children's rates range from $40 to $110. Children 15 and under are permitted only in the coach and first classes.

The Sept. 19 event will feature live music, photo opportunities with the steam engine, a ribbon cutting and remarks by local dignitaries.

The steam locomotive will also make several eight-mile trips throughout the days of Sept. 5 and 6, with a single class of service in the train's historic 1923 Harriman cars. Tickets for the "Cataract Creek Rambler" will be sold on-site for unreserved seating and will cost $15 for adults and $10 for children 15 and under.

"In addition to commemorating the history of the Grand Canyon Railway - both its original run of almost 70 years beginning in 1901 and its modern run of the last 20 - we are looking to our future as an eco-friendly railway," said Gordon Taylor, general manager of the Grand Canyon Railway. "When we moved to an all-diesel fleet last year we decided to keep the steam locomotives maintained so that we could use them for special occasions like this, our 20th anniversary of the return of the Railway."

For several years the Railway operated the steam engines from Memorial Day to Labor Day, but last year it discontinued their regular runs because of environmental considerations. Operating an all-diesel fleet of locomotives year-round saves a considerable amount of fuel and reduces greenhouse gas emissions and air pollutants associated with steam locomotives.

The Grand Canyon Railway recently became the first tourist railway in the United States to receive ISO 14001 third-party certification of its environmental management system (EMS) after a two-year process involving complete review, development and implementation of environmental initiatives in all of its operations.

The Grand Canyon Railway has two operable steam locomotives that have been restored to like-new working condition. Locomotive No. 4960 was built in 1923 by Baldwin Locomotive Works in Philadelphia. It operated a freight- and coal-hauling service for the Midwestern Chicago, Burlington & Quincy (CB&Q) railroad until the late 1950s and made its first official run on the Grand Canyon line in 1996. Locomotive No. 29 was restored in 2004 at a cost of more than $1 million and 26,000 man-hours of labor. An SC-3 class locomotive, Locomotive No. 29 was built in 1906 by ALCO in Pittsburgh and weighs 185 tons.

Today the Grand Canyon Railway operates daily train service to the Grand Canyon. Travelers have a variety of options, including individual rides as well as getaway packages featuring accommodations and meals.

The Grand Canyon Railway Hotel was designed to resemble the historic Fray Marcos Hotel and Williams Depot structures that stand nearby. The hotel is comprised of 287 standard rooms, 10 two-room suites and one luxury suite as well as one meeting room available for wedding receptions, seminars and other functions; a large courtyard with barbecue and wet bar; a game room for children; a large enclosed crescent-shaped pool and hot tub and an exercise room.

Grand Canyon Railway is an authorized concessioner of the National Park Service and the U.S. Forest Service. For more information, visit

The Grand Canyon Railway is operated by Xanterra Parks & Resorts. Xanterra also operates lodges, restaurants and accommodations at the South Rim of Grand Canyon National Park. For reservations inside the park and for more information go to