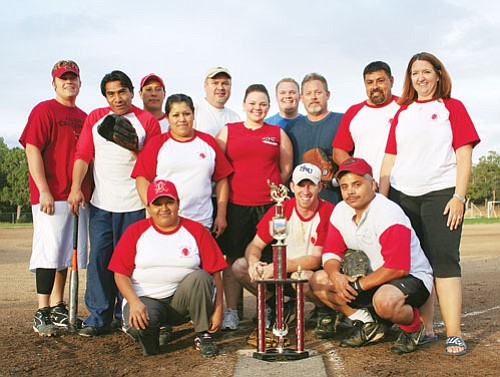 GRAND CANYON, Ariz. - It's been a thrilling season for the Grand Canyon Co-Ed Softball League which began their regular season June 1. The league is operated out of the Grand Canyon Recreation Center and can currently be found on the field behind the center each night except Friday and Saturday. Games are scheduled to begin at 6 p.m. League Commissioner Mark Harner said he expects the playoff tournament to conclude by Aug. 26. Players with the Red Feather team, meanwhile, are celebrating a big victory, after the team was named regular season champions following a game Aug. 9.

Harner called the game a "tight" one.

"The game was very tight throughout and timely hitting was important, but it was pitcher Greg Walker keeping the NPS batters off balance that made the difference in the game," he said. "They both went into the game with 9-3 records."

There are currently eight teams in the league, from areas in and out of the Grand Canyon National Park, who participated in games this year, according to Harner. Teams include Red Feather, the National Park Service (NPS), McDonalds, We Cook, Albright, Little Angels, All-Starrs (made up of Xanterra employees) and Grand Canyon Airport. Red Feather won the championship, in a one game playoff, with a 12-9 victory over NPS. Final standing for the league showed Red Feather with a record of 10-3, NPS with 9-4, McDonalds 8-4, We Cook 7-5, Albright 6-6, Little Angels 4-8, All Starrs 4-8 and Grand Canyon Airport with a record of 2-10. First round winners of round one of the double elimination tournament include Albright, McDonalds, NPS and Red Feather.

"Everyone is invited to come out and watch the games, which are held on the field behind the Rec Center," Harner said.