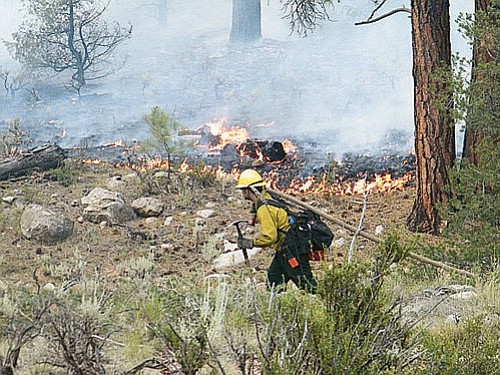 Rae is about 206 acres, moving slowly to the southwest from Forest Road 302 between the 2008 X Fire and 2009 Indian Fire. One Kaibab engine and the incident commander will continue to patrol the fire perimeter and monitor fire progression.

Miller is 289 acres and spreading to the northeast. Today, the Mormon Lake Hotshots and four engines, under the direction of the incident commander, will continue holding the northeastern boundary of the planned management area along Road 343h.

Anderson is 104 acres, three miles north of Red Butte, and progressing northward within a planned 1,000-acre management area. Resources assigned include the incident commander, operational personnel, the Flagstaff Hotshots, two engines and one archaeologist. Today, personnel will continue working ahead of the fire along the eastern boundary. They will use hand ignitions as necessary to prepare roads, cultural sites and wildlife developments for projected fire spread.

When the fires started, they were placed in monitor status. Upon further evaluation, officials decided the fires could benefit the landscape and meet resource objectives. Some of these objectives include returning fire to a fire-dependent ecosystem, protecting cultural sites, improving wildlife habitat, and managing smoke production.

Smoke dispersal is generally good during the day; however, wind shifts in the evening or wind gusts from thunderstorms will transport light smoke into Ten-X campground, south of the Tusayan airport and along State Route 64.

The weather service is forecasting a change in the current weather pattern beginning early next week. There is an increased chance of moisture in this system.