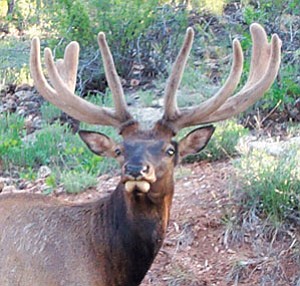 Grand Canyon may be the star attraction here but surrounding it are 1.6 million acres of spectacular great outdoors known as the Kaibab National Forest.

First established as the Grand Canyon Forest Reserve in 1893, it is one of six national forests in Arizona and is the largest contiguous ponderosa pine forest in the United States.

Kaibab (pronounced KI-bab) is derived from kaibabits, a Paiute Indian word meaning "mountain lying down." Though Maj. John Wesley Powell referred to this "island in the sky" as the Kaibab Plateau in the 1870s, it wasn't until 1908 that the name was bestowed officially to the forest on the north side of the Canyon. In 1934, the Tusayan National Forest at the Canyon's South Rim became part of the Kaibab. Today, the forest is divided into three areas - the Williams, Tusayan and North Kaibab ranger districts.

Elevations vary from 5,500 feet to 10,418 feet at the summit of Kendrick Peak and the scenery ranges from pinon pine and juniper in the south to the alpine meadows and mixed conifer forest found at the higher elevations.

The forest has four wilderness areas - Sycamore Canyon, Kendrick Mountain, Saddle Mountain and Kanab Creek - and some 370 miles of trails on the forest for hiking, horseback riding and mountain biking. The Kaibab offers more than 115,000 acres of wilderness for the public to use and enjoy.

There is also a diversity of wildlife including elk, deer, antelope, coyotes, wild turkeys and mountain lions.

On the South Kaibab, visit Dogtown, Whitehorse, Cataract or Kaibab Lake. Campsites on the North Kaibab are Jacob Lake and DeMotte. The Ten-X campground is south of Tusayan.

Unlike in national parks, hunting is allowed on Forest Service lands in season and with proper a proper permit tag from the Arizona Game and Fish Department. Visit www.gf.state.az.us for information.