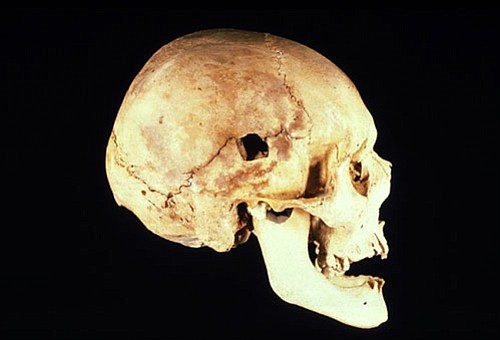 The park's Museum Collection helped forensic scientists determine that this skull doesn't belong to Glen Hyde, who disappeared on a river trip with new bride, Bessie, in 1928.

The Grand Canyon National Park's Museum Collection houses nearly 1 million items, from photographs and historic documents to John Wesley Powell's watch and a fragment of the United Airlines plane involved in a 1956 mid-air collision over the Canyon.

About 2,500 people use the collection each year for research related to the Canyon's natural and human history. And, every once in a while, it can help solve a mystery.

One of Grand Canyon's most enduring mysteries concerns the skeleton found in Emery Kolb's garage in early 1977, shortly after Kolb's death the previous December. A shoe and some clothing remnants were found with the skeleton, and there was a bullet hole in the skull. Shortly after the skeleton was found by Kolb's grandson Emery Lehnert, speculation began that it was the remains of Glen Hyde, who disappeared with his bride Bessie on their honeymoon trip down the Colorado River through Grand Canyon in 1928.

The Hydes were attempting the fastest river trip through Grand Canyon, and the first for a woman, when they visited Kolb at his South Rim home in mid-November 1928. More than a month later, after Glen's father reported the couple overdue, a search party found the Hyde's scow intact with all their gear near River Mile 237, but without a trace of the honeymoon couple.

In 1987 the unexplained disappearance of the Hydes in Grand Canyon was featured in NBC's television show, Unsolved Mysteries. The program evaluated the possibility that the skeleton found in Kolb's garage was that of Glen Hyde. On screen, forensic anthropologist Dr. Walter Birkby emphatically stated that the skeleton was not the remains of Glen Hyde based on a reconstruction of the skull's facial features.

In 2001 author Brad Dimock revisited the possibility that the Kolb skeleton were the remains of Glen Hyde in "Sunk without a Sound," his comprehensive history of the Hyde river trip. The book included thorough analyses of all the stories that had emerged over the intervening decades about the Hydes' fate, including the lingering rumors that Glen's skeleton had been found in Emery Kolb's garage. Like Dr. Birkby, the Coconino County Sheriff's Office and others who collaborated on the original investigation of the skeleton, Dimock unequivocally concluded that it was not Glen Hyde. Yet the legend remained and was told around campfires and on tours in Grand Canyon. And no reliable information had ever been produced on the identity of the skeleton or why it had been in the Kolb garage.

In late 2008, the fortuitous combination of a recent donation of photographs and documents to the Grand Canyon Museum Collection, and an effort by the Coconino County Sheriff's Office to solve the county's cold cases led to the identification of the Kolb skeleton as that of a suicide victim found in the park in 1933.

In 2006 Bob Williamson, a retired U.S. Forest Service Director of Range Management in the Supervisor's Office in Washington, D.C., contacted the Museum Collection about donating almost 500 black-and-white photographs and negatives, as well as many personal documents from his parents' collection. His father, Robert R. Williamson, had worked at Grand Canyon as a ranger in the late 1920s and 1930s.

Grand Canyon Museum Technician Kim Besom said, "I noticed several images of a human skeleton among the negatives Mr. Williamson donated. I was curious so I searched through the Superintendent Monthly Reports for the time period that Mr. Williamson's father was a ranger. The Superintendent Monthly Reports are a collection of reports from all divisions describing what happened each month, and they provide a wealth of info about park happenings in the early years."

From the June 1933 Superintendent Report, Besom learned that the skeleton of a man was found on a ledge under the canyon rim, near Shoshone Point, and that a 32-caliber revolver with two cartridges and an exploded shell were found near the body. A bullet hole in the skull above the right temple suggested suicide. The report also stated that one shoe, a leather belt and pocketbook, and some tattered rags were found near the skeleton, and it appeared that death had occurred several years previously. Ranger Williamson had been one of the investigating rangers.

Last September, retired Grand Canyon National Park criminal investigator Joe Sumner contacted the Museum Collection. As a volunteer on the Coconino County Sherriff's Office cold case squad, he had been assigned the Grand Canyon cold cases, including the unidentified victim of the 1933 suicide and the Kolb skeleton. Sumner asked Besom if the Museum Collection had old ranger reports.

Besom said, "Our collection doesn't include the park's law enforcement records, but I explained to Joe that the Superintendent Monthly Reports are a great source of information about the park. I also said that if we get creative we can sometimes find information about law enforcement from other unexpected sources. As an example, I told him about the Williamson photos we had received that included several of a skeleton found out at Shoshone Point. [Much to my surprise], Joe asked if it was a skeleton found in June 1933."

Since working on the cold cases, Sumner had come to suspect that there might be a link between the Shoshone suicide and the skeleton in the Kolb garage, but he had no way to prove it. Besom sent the skeleton photos to Sumner, who was able to compare them with the Kolb skeleton stored at the Coconino County Medical Examiner's Office. The skeleton and the shoe proved to be a positive match with the photographs.

From other research, Sumner discovered that Emery Kolb had sat as a county coroner jury representative for Grand Canyon. Sumner speculates that Kolb must have acquired the skeletal remains as a county representative after the death inquest, but why they ended up in his garage remains a mystery.

Sumner is still trying to determine the identity of the man who committed suicide at Shoshone Point. Even though it is not known who the skeleton is, the fact that Sumner's investigation determined the provenance of the Kolb skeleton is further proof that Glen Hyde was not laid to rest in Emery Kolb's garage.

When Williamson donated the photographs and documents from his parents' collection to the park, he had no idea that they would help partially solve two Grand Canyon cold cases. Every donation to the park's Museum Collection adds resources that can add to our understanding of the canyon's natural and human history. Indeed, donations are the lifeblood of any archive. If you have historic photographs, documents, or other materials that you think might enhance the collections or even help solve a mystery, contact Museum Collection staff at (928) 638-7769 or GRCA_Museum_Collection@nps.gov.

Allyson Mathis is the science and education outreach coordinator for the Division of Science and Resource Management at Grand Canyon National Park.