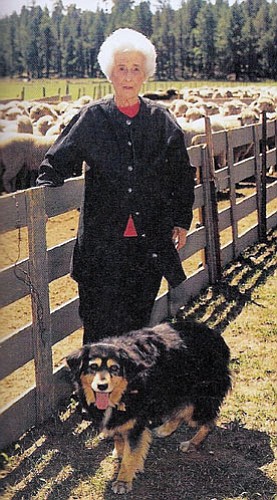 Marianne Etchart Manterola was born on April 14, 1909 in Argentina, South America. Her parents migrated to Argentina in their youth from the Basque country of France and Spain. When Marianne was three-years-old, the family returned to La Madeleine Basses Pyrenees France.

She immigrated to the United States at the age of 17 arriving at Ellis Island on Nov. 20, 1924 and then traveled on to Flagstaff, Ariz., where she had cousins. She worked as a housekeeper for the Babbitt family in Flagstaff and then with the Dr. Matanovich family in Phoenix.

She married Jose Antonio Manterola in November of 1932 in Wickenburg, Ariz. Tony was born in Sumbilla, Navarra Spain and had come to the United States at the age of 17. They had four children - one son, Joe Manterola; and three daughters, Sylvia Manterola, Carmen Auza and Marie Guappone. She and her husband Tony founded Manterola Sheep Company in early 1945. Prior to that Tony had been a partner in the Ohaco Sheep Company since 1923. Marianne, Joe and Sylvia have continued the sheep operation since Tony's death in November 1956.

She is a member of the Arizona Wool Producers Association and Auxiliary, Arizona Cattle Growers and has been recognized as an Arizona Pioneer Rancher at the Arizona National since age 75.