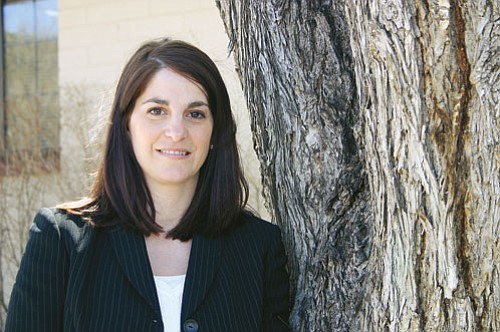 <br>Patrick Whitehurst/WGCN<br> New WEMS Principal Rachel Savage will move to the Williams area this summer and will begin her duties at the beginning of the 2009-2010 school year.

WILLIAMS - Iowa native Racheal Savage will become the new principal for the Williams Elementary-Middle School (WEMS) at the start of the 2009-2010 school year, taking over for retiring WEMS Principal Donny Bridges. Savage, who currently lives in Iowa, was offered a contract during the April 8 meeting of the Williams Unified School District (WUSD). She said she plans to move to the area in the summer with her husband Eric and two children: Gabriella, 10, and R.J., 9.

"I am excited. I know it's not going to be easy and I know that there will be bumps in the road, but I'm ready to be here and I'm ready to get started and I'm going to do my best," Savage said.

She said her first goal, when it comes to her new position, will be to ensure student achievement.

"To me, my first goal is always going to be what's best for kids. It's always going to be improving, improving, and improving and raising student achievement. After that comes supporting the faculty and just being involved in the community in whatever way I can with my husband and my children. That's where I'm at right now as far thinking about coming in with some goals. Enrollment and these other things, morale, are all natural byproducts when the machine is functioning well."

"The last year and a half, I've been serving as an administrative intern and I've been functioning as a principal and as an assistant principal in the current building that I'm working in Iowa, 2,000 students, 150 faculty, and I've basically had experience in every facet of administrative responsibility," Savage said. "I worked with district responsibilities, community liaison, working with the school board (and) I've done a significant amount of time serving at the elementary level, working with elementary principals, especially in some of our buildings where we have high poverty, nearly 85 percent free and reduced lunch, that type of thing."

Locals Sarah Massey, Connie Greedy, Leslie Mitchell, Amanda Orozco and David Miggins served as members with a special principal hiring committee, which oversaw the interviews related to filling the position. The committee offered their recommendations to school district officials after finding a number of suitable candidates. According to members, Savage rose to the top of the list when it came to prospective applicants.

Savage was born and raised in Dubuque, Iowa and earned her undergraduate degree at Loras College. She pursued her Master's Degree in education at Loras as well, with an emphasis in teaching modern foreign languages. She also pursued a second master's degree in educational administration. She has worked in education field for the last 13 years.