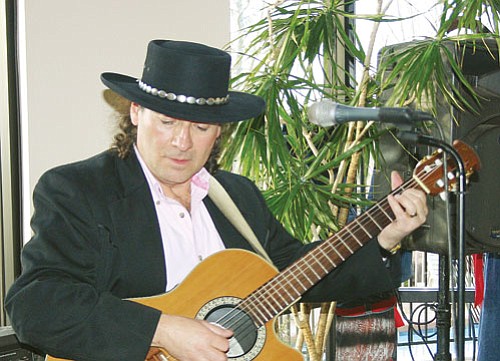 WILLIAMS - The name Omar Mondragon de Leon is not easy to forget, nor is the man's music. Known by many as simply "Omar," the local musician has entertained in the Williams area for the last 14 years. He can now be found at the Western View Steakhouse, located at the Best Western Inn of Williams near the Denny's Restaurant at 2600 W. Route 66. Omar performs in the "marketplace" area, between the steakhouse and the popular Kachina Lounge, from 6-10 p.m. Tuesday through Saturday. While the steakhouse opened in October of last year, the Kachina Lounge will celebrate one year of business next month. The Best Western can be reached at (928) 635-4400.

Omar said he loves performing at the Western View and was happy to work out an arrangement with Best Western Inn of Williams Manager Sheryl Olson.

Omar's music runs the gamut, from 30s tunes to modern music: country, latin and more. Not only can he perform in three different languages, he also knows over 400 songs by memory alone. He sings in English, Spanish and Italian. His CDs are also available for purchase at the steakhouse.

"I try to do a variety of music," Omar said. "I adapt with the crowd. If I see cowboy hats, I know what to do. If I see some elderly people, I go into the '30s and '40s. If I see rockers, I rock them. I do a lot of Latin music, not only from Mexico, but from Spain, South America and from Cuba. Basically I'm a Latin boy."

Born in Texas, Omar started his musical career at eight-years-old when he began playing drums and tap dancing. He played in a rock band at the age of 12. He's entertained in the Flagstaff area for the last 18 years and has played Williams for roughly the last 14 years. His music has graced Doc Holliday's Steakhouse in the past, as well as Miss Kitty's Steakhouse and Pancho MacGillicuddy's as well as more. For the last three seasons, he has performed at the Quality Inn Mountain Ranch Resort.

"After playing in Williams for 14 years, off and on, there were times when I would go to Scottsdale for two or three years and come back, but I would say that most people have heard my name, even if they haven't heard me. From young and old, people will come in and, from when they were teenagers, they knew me. They come in and they remember me."

Olson said Omar was chosen to perform at the steak house due to his powerful stage presence, among other reasons.

"The ambience he creates with his music and his professionalism exceeds the area," Olson said. "I just think we've added one more wonderful member to our staff with Omar, one more member to our hotel family."

Olson said the Best Western Inn of Williams has been owned by the Olson families since the hotel's construction in the 1990s.

"The Olson families have always owned the hotel, and had a different managing partner, but now own it exclusively," Olson said. "Since then we've opened the restaurant. We turned it from a limited service hotel into a full service hotel, with a restaurant, lounge (and) all the amenities that the tourists that are coming to the Grand Canyon are looking for."

Besides the tourism market, Olson said she is a firm believer in local business as well.

"We very much want to have a local flavor in our lounge and in our dining room and in our marketplace," she said, adding that the newly opened Western View Steak House serves everything from steaks, lamb, chicken, pork and more. "Our steakhouse opened Oct. 28."

"It's very health-oriented. Nothing is fried," Olson said. "Everything is baked, broiled, sautéed and it's all done very healthy. The only thing probably not healthy is our desserts. Those are decadent."

Olson said she is a firm believer in hiring locally and said she tries to hire from within the community whenever possible.

"I can't explain how much we respect Williams and the people that live here," Olson said. "We've had a lot of locals and we've held a lot of community events up here."