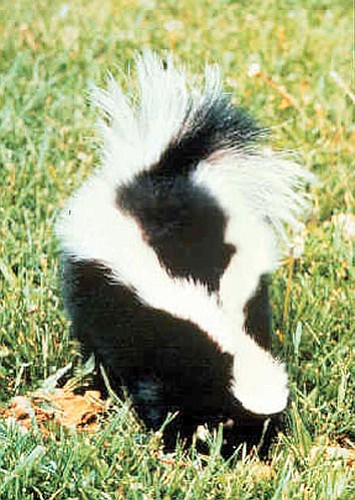 Fourteen rabid foxes, six skunks and a ringtail-Bassariscus astutus have been found in the Flagstaff area recently.

Several of the rabid animals have exhibited aggressive behavior. Hikers in the Mt. Elden area have reported numerous encounters with foxes. Hikers involved in these incidents were able to scare the foxes away to avoid exposure to the disease. In addition, a resident on Paradise Road north of Buffalo Park in Flagstaff was attacked by a fox while in his driveway. The individual was not seriously injured and is receiving a series of rabies vaccinations.

Most recently, a child playing in Foxglenn Park was chased by a skunk. The skunk latched on to the child's pants but did not break through the fabric to puncture the skin. City of Flagstaff Animal Control captured the skunk, which tested positive for rabies on April 1.

Because wild animals become very aggressive when rabid, there is a high level of concern regarding public safety and the safety of domestic animals. The continued increased rabies activity in the wild animal population in the Flagstaff area has prompted health officials to begin the process of enacting a rabies pet quarantine. The quarantine would place restrictions on cats and dogs in all areas within the Flagstaff city limits and additional locations as needed, as well as place certain restrictions on feeding and interacting with wildlife.

The CCHD has applied for a grant from the U.S. Department of Agriculture Wildlife Service to fund the purchase of the vaccination packets to be distributed in areas with increased rabies numbers. Areas included in the current plan are the Mt. Elden vicinity and the Continental County Club and Foxglenn areas. Partner agencies, including the Forest Service, United States Department of Agriculture and Arizona Game and Fish Department will assist in the distribution of the packets and continued public education.

Health officials are reminding the public to use caution while engaging in outdoor activities and to always avoid any wild animal, particularly one that appears to be sick, is dead, or is behaving in a strange manner.

• If hiking with a dog, keep it on a leash no more than six feet in length. Do not let your dog wander freely on the trails as it could come into contact with a wild animal, increasing its risk of exposure to rabies. State law requires that dogs be leashed and kept from running at large. This includes dogs on Forest Service trail system. Officials will be walking trails in the area and ticketing individuals that have their dogs off leash. This provision also includes land under the control of both state and federal government. There are several signs posted by the Forest Service throughout the trail system as reminders of this law.

• Bring a trekking pole or walking stick with you on your hikes throughout the Mt. Elden Trail System. If you see a fox near you, turn around and go the other way. Do not run. Walk slowly and keep an eye on the fox to ensure it is not following you. If a fox runs at you, use your trekking pole or walking stick to stun the fox and move as quickly as you can out of the area. Remember normal behavior in a fox is shyness and avoiding any human or domestic interaction. If a fox is coming at you or at your dog, something is wrong.

• Report any unusual behavior. Call CCHD Animal Management at (928) 679-8756. After hours call the Coconino County Sheriff's Office at (928) 774-4523 immediately. Be sure to give very specific directions to the person taking your information and a phone number so the officer can contact you.

• If you are bitten by a fox or other wild animal immediately go to the hospital and inform the staff of your situation. The hospital staff will contact the appropriate agency to collect the animal. Try to give specific directions to the agency investigator to ensure they can locate the animal.

The CCHD Animal Management office conducts an active program to monitor for rabies. Wild animals found dead are routinely tested in order to monitor rabies in those populations. Pets, including dogs and cats, that come into contact with wild animals may be quarantined until it can be determined if they are adequately vaccinated or were not exposed to rabies. For more information, call CCHD Animal Management at (928) 679-8756.