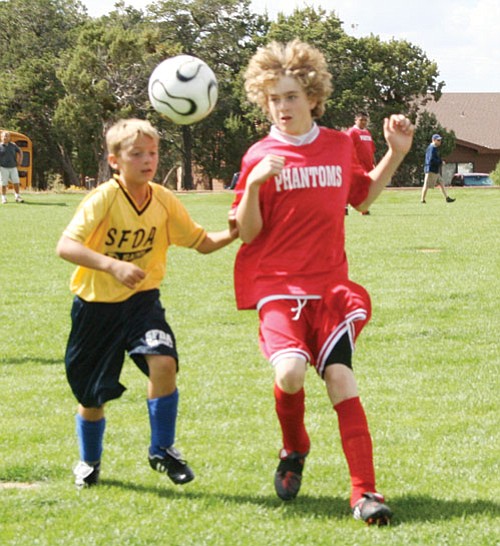 The Grand Canyon Middle School Phantoms soccer team has been undefeated so far this season, with each of their six victories so far won by comfortable margins.

"They're coming together really well," he said. "They've been practicing hard and paying attention and their skill levels are increasing."

Last weekend, they won a 6-0 shutout against Northland Prep, with one goal apiece for Luke Streit, Molly Struble, Ethan Berry, Katreena Haswood, CJ Kerns and Joey Bankston. They beat St. Mary's 5-0 with Bankston and Streit each contributing two and Israel Fellows scoring one.

On Saturday, Sept. 13, they faced Ash Fork, winning 4-1 and St. Mary's, who they beat 5-1. Scoring in the Ash Fork game were Streit, who put away two, and one each for Fellows and Struble. In the game against St. Mary's, Streit was again the high scorer with two. Berry, Struble and Fellows each scored one.

At their first outing, on Saturday, Sept. 6, they dealt two 8-0 shutouts. Against Parks, Streit scored three, Travino Taylor scored two and Berry, Fellows and Haswood each scored one. Against Seligman, Streit and Berry each scored three and Kerns scored two.