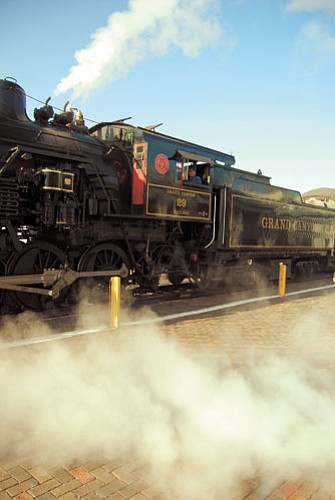 <br>Patrick Whitehurst/WGCN<br> Regular steam service will no longer be offered at the Grand Canyon Railway, according to officials with Xanterra Parks and Resorts. While the steam engine will still be displayed, diesel engines will make the run from Williams to the Grand Canyon year round.

The familiar hooting of the steam engine in Williams is set to become a thing of the past, as officials with Xanterra Parks and Resorts recently announced their plans to eliminate the historic steam engine from The Grand Canyon Railway's fleet. Citing environmental concerns, Xanterra officials plan to keep the steam locomotive as a "living" display, while using diesel locomotives for the actual runs between Williams and the Grand Canyon.

Judi Lages, vice president of sales and marketing for Xanterra Parks and Resorts, said the decision to eliminate the steam engine from regular service is based on a number of factors. According to a Sept. 15 letter, becoming "greener" counted as one of the largest reasons behind the move. Officials hope to save 113,000 gallons of diesel fuel a year by eliminating the steam engine, as well as saving an estimated 151,200 gallons of water. Other environmental concerns associated with the use of the steam engine would also be eliminated, according to the letter, including the use of journal oil, steam oil and bearing oil, as well as over 25 different boiler chemicals. Greenhouse gases and other pollutants are also expected to diminish. Xanterra officials recently hired coordinator Morgan O'Connor to oversee environmental conditions at the Railway's maintenance yard. According to O'Connor, who spoke before the Williams Rotary Club July 15, environmental conditions at the maintenance yard were more "brown" than "green."

"There were 20 jobs that were affected. Some were part time and some were full time," Lages said. "Our boss is the National Park Service and it is just not in keeping with our environmental mission to continue to run the steam. We're a very, very green company."

Lages said Xanterra administrators have received a number of e-mails from individuals opposed to their decision.

"We've received maybe 20 emails from steam enthusiasts and we can understand their disappointment," Lages said. "We don't think that the majority of our riders are going to see a difference. We don't think it's a going to have an overall effect."

Other popular attractions, she said, such as the annual ride of the Polar Express, will continue normal operations.

"Polar express is going to continue as it always has," Lages said. "Our numbers are good this year."

Steam enthusiast Jeff Stafford called the elimination of the steam engine a "travesty" and said he hoped Xanterra would reconsider their decision.

"Grand Canyon steam engines are some of the cleanest steam engines around and put out less pollution than many diesel engines. In fact, both engines 29 and 4960 were recently overhauled so that they would be more fuel efficient," Stafford said. "The lost jobs, threats to summer tourism, and negative impacts to the town of Williams cannot be underestimated. Many visitors ride the railway in the summer specifically for the steam experience. Max and Thelma were concerned when they sold the railroad to any new owner that the history would be preserved and jobs would be left untouched. They must be disappointed to hear this news."

Meanwhile, a formal announcement on the pending sale of the Grand Canyon Railway to Colorado billionaire Phil Anschutz has yet to be announced. Word of the sale first came to light in June of this year and a tentative closing date was set for this month. The sale would mark the second sale of the Grand Canyon Railway in almost as many years. Xanterra Parks and Resorts first bought the company from founding owners Max and Thelma Biegert in early 2007. Anschutz, listed in "Forbes" magazine as the 31st richest person in America, is involved in a number of entertainment ventures. According to Xanterra officials, Anschutz indicated he would retain staff at the management level and continue the company's environmental efforts at the Railway.

Xanterra officials would not comment on the sale and what impacts that sale might have had on the recent removal of the steam engine from regular service.