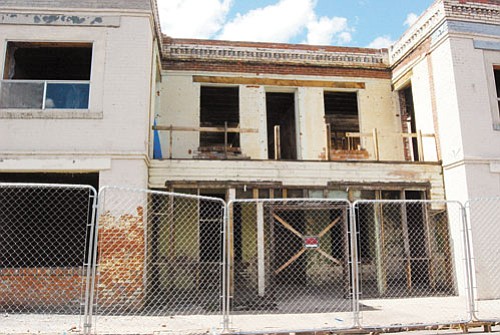 <br>Patrick Whitehurst/WGCN<br> Restoration work continues on the old El Pinado Hotel on Second Street. Property owners Dennis and Pam Dreher plan to call the revitalized historic building The Cottage Hotel and said they plan to offer apartments and commercial space within the building.

Williams residents may have noticed the demolition work that is currently under way at the old El Pinado Hotel, located on Second Street between Route 66 and Grant Avenue, thanks to new owners Dennis and Pam Dreher, who recently purchased the aging historic landmark. The two said they have a number of plans in store for the building.

"We're going to restore the façade, not like it (looks) now, but like it should look now. We're going to take off the paint, repair all the brickwork and replace windows," Dennis Dreher said. Both Dennis and Pam Dreher relocated to Williams from the Flagstaff area, where they lived for 16 years.

Dreher outlined his plans for the old hotel during a recent meeting of the Williams Rotary Club, held at Max and Thelma's Restaurant at the Grand Canyon Railway. He said the downstairs of the old hotel would be comprised of commercial property when the renovation is completed. He plans to turn the upstairs into two 600-square foot apartments. Both apartments will have access to a balcony area. The Drehers eventually plan to live on the property as well.

A number of discoveries were made during the demolition process, according to Dreher, including doors that were once windows as well as old newspapers dating back over 50 years. Lumber and other materials were also found on the roof of the building.

The building itself was built in 1905. Other structures were added on in subsequent years.

"At the time water became available, they built this structure and another similar one on the other side of the back to house showers and toilets. We took that down, too. We're going to replace that with a larger piece," Dreher said. "What we heard from people around town is there got to be more and more rooms. The rooms got smaller and smaller, kind of a rooming house situation. When we got it, it looked pretty sad."

Portions of the back of the building were remodeled as recently as the 1970s or 1980s, Dreher said, adding that a number of other additions were constructed prior to that, most likely in the 1930s or 1940s.

"In 1983 a professor from NAU came through town and did kind of a survey of the historic district and this was one of the buildings outside of the downtown historic district yet considered with historic significance," Dreher said, adding that one of the features that he believes adds to its historic character are the double towers on either side of the structure.

"We'll be pretty proud of it when it's done," Dreher said. "It will take a long time, but I think it's a fun project."

Williams City Manager said he applauded the work Dreher and his contractor, Merrick Spalding, are doing on the historic structure.

"I think historic buildings in Williams is really one of our top attractions we have," Wells said.