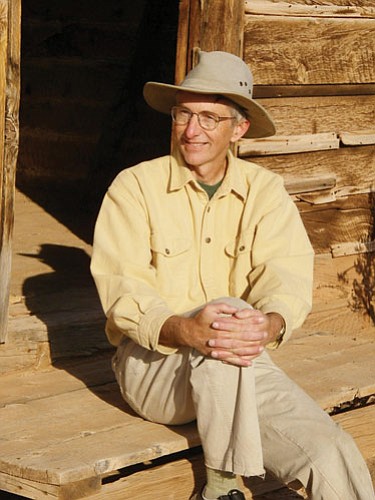 Back in the early 1900s, it was the development of beaten paths that brought tourists flocking to an increasingly accessible Grand Canyon. But even before the crowds of today, outfitting pioneer David R. Rust felt that there were more authentic experiences on the paths less traveled.

"He was one of the first to do wilderness education," said Frederick Swanson, author of "Dave Rust: A Life in the Canyons." "To him, getting a genuine travel experience meant you needed to learn something about the landscape."

Swanson will be here Saturday to talk about Rust's life and philosophy on Saturday, with a program at 1 p.m. for the Grand Canyon Historical Society.

The book was released last year by the University of Utah Press. Swanson said he was compelled to write it as he learned more about Rust's mostly overlooked life that earned brief mentions in other Canyon history accounts.

"I learned about him a few years ago," he said. "He got all over the Colorado Plateau. The breadth of his experience and the love he had for this landscape really spoke to me."

Rust came to the area from Utah in the late 1800s. Like most of his contemporaries, such as William Bass and John Hance, he came to join the rush to stake mining claims. And like them, he soon turned to mining the more reliable metal reserves from the pockets of tourists. But while other guides outfitted and led hunting parties or recreational jaunts, Rust's tours could get downright scholarly. Many of his outings retraced the routes of famous expeditions and included readings from textbooks and comparing sketches and maps to actual locations. Some trips ventured into backcountry areas all over the Colorado Plateau, often for as long as six weeks. He also established the first Inner Canyon lodging, a tent city near current-day Phantom Ranch designed to keep tourists longer below the Rim.

Swanson said that his clientele came from a privileged group that had both money and the time to travel for extended periods.

He also saw the tourism potential of the river and was the first to open a commercial river running enterprise near Glen Canyon. Though he never boated through the Canyon, he did advise the Kolb brothers prior to their landmark trip in 1911.

Historical Society reading: 1 p.m. at the Shrine of the Ages. (Join members at 11:30 a.m. for lunch at your expense at Yavapai Cafeteria). That morning at 10, there will be a tour of the historic boats at the Museum Collection building on Albright Street. Jan Balsom, chief of cultural resources, will lead the tour.