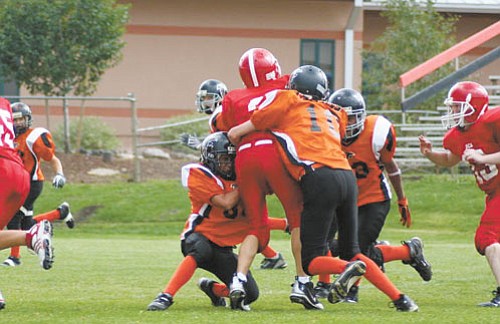 <br>Photo by Shawna Brownlee<br> The Williams Elementary-Middle School Falcons have gone undefeated for the 2008 season as of Sept. 9.

The Williams Elementary-Middle School Falcons have kept their powerful momentum so far this season after their strong win against the Camp Verde Cowboys Aug. 19. In their 43-8 victory, which kicked off their season, the Falcons showed their cohesiveness as a team. The Falcs are currently 6 and 0 for the 2008 season, according to Coach Deniz Chavez. She said that first game against the Cowboys still stands out in her mind.

"They are the only team to score a touchdown on us right now," Chavez said.

Besides Chavez, the WEMS Falcons are coached by Jeff Brownlee, Herman Nixon and Phillip Martin.

From there the Falcs went on to play Glassford Hill, winning the game with a final score of 59-0. A scheduled away game against Cottonwood, recently cancelled by the home team, brought the Falcs up to 6-0 for the 2008 season.

"These kids have played five games in two weeks," Chavez said of the Falcons, adding that the teams' defensive line has served the Falcs well during their recent, busy game schedule.

"People are having a hard time getting through those boys. They're big boys and they're doing fantastic," Chavez said of the Falcons team.

She said the middle school players continue to improve vastly from week to week, the team is rolling and more disciplined, and that the student athletes are very "Gamewise" when it comes to the mechanics and inner workings of football.

"They are doing fantastic, knowing their plays and everything," Chavez said. "Our offensive line is fantastic, too. Our whole team is just fantastic. They all work really well together. They're just good."

It has been some time since the WEMS Falcons have gone undefeated during the football season, according to Chavez, who said that the team had already lost a couple of games by the same time a year ago. An undefeated streak, however, is nothing new to athletes at the school.

"Not in football, but in basketball we did," Chavez said. "In basketball we went undefeated for the whole season for the boys. We have a good bunch of athletic boys this year. We went 50/50 last year. I think it was four and four out of the eight games."

The Falcs face three more games in the regular season prior to the start of the playoffs, which are scheduled to kick off after the Falcs' final home game against Heritage Sept. 30. Originally scheduled as an away game, the Falcs' match up will now take place in Williams beginning at 4 p.m.