Volunteers give nature a hand 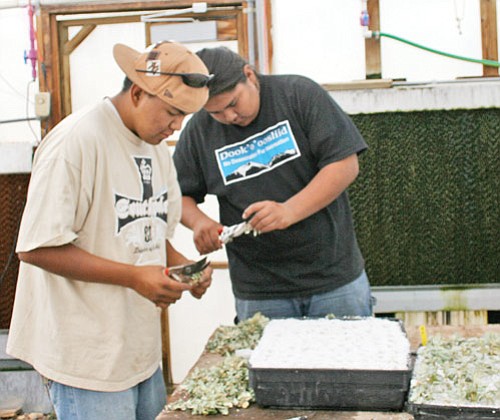 Preserving a natural landscape may seem like a job that takes care of itself, but at Grand Canyon, sometimes nature needs a helping hand.

Volunteers are invited to lend one next week as the park's vegetation program leads a seed collection and invasive plant removal project on the South Rim.

Volunteers will work collecting native seeds and cuttings throughout the park and tending and transplanting plants at the park nursery. The workday will be from 8 a.m.-4 p.m. Park staff will meet volunteers at Mather Campground at 8 a.m. on Monday.

The nursery is located at the water treatment plant across from the kennel off of Rowe Well Road.

This outing is being organized by the Grand Canyon Trust, with details and application available at their Web site, www.grandcanyontrust.org. But, according to Ashton Bedford, who manages the nursery on a shoestring, volunteers are welcome at any time.

"Volunteers are pretty much the lifeblood of the program," he said.

Contributions vary from a few hours to one regular volunteer who puts in 32 hours a week.

The program is important both to help the park develop an inventory of native plants, as well as to care take those removed for construction projects such as at the South Entrance Station and Hermits Rest. The South Rim facility houses plants from both rims.

"Everything planted in the park comes from the park," Bedford said.

Whether they collect seeds or cuttings depends on the plant. Grasses do better when started from seed, while other species, like cliff rose, fare better when propagated by cuttings.

Collecting and gathering are ongoing projects, since something is always in seed.

"We have a seed intern whose job is to go out and scout for seed that's ready to be collected," he said.

Along with collecting, volunteers also tend the plants in the nursery, watering, weeding and transferring to larger containers.

Plants can be in the nursery for time spans ranging from a few months to a couple of years.

Bedford said that it's not always easy to do in the greenhouse what nature does so well.

He added that gathered seed has about a 50 percent success rate.

Once potted, plants can be in the nursery for time spans ranging from a few months to a couple of years. Most goes back to where it came from or to fill in after other construction projects. Bedford said they hope to get a bigger facility so they can propagate plants for other parks in northern Arizona.

Currently they maintain a database online where they enter everything they learn about the species that they grow.

"We take really good notes on what we're growing, the growth hormones we're using, the seeding treatment and so on," he said.

For information on volunteering, visit http://www.gcvolunteers.org/grandcanyon_090808.htm or contact Bedford at ashton_bedford@nps.gov.