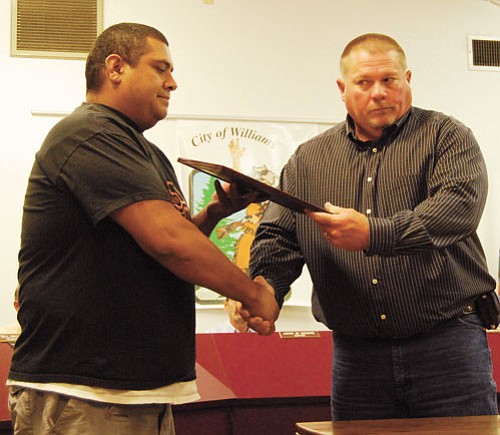 <br>Patrick Whitehurst/WGCN<br> Williams Police Chief Herman Nixon (right) shakes hands with Mike Atencio after giving him a plaque for his part in helping authorities apprehend a wanted suspect in Williams.

A local Williams man earned the admiration of the Williams Police Department for his help in apprehending a suspect wanted in connection with a number of felony charges. Williams resident Mike Atencio was honored by the police department for his assistance in catching the suspect during the regular meeting of Williams City Council Aug. 28. Williams Police Chief Herman Nixon, as well as members of the city council, presented Atencio with a plaque during the meeting.

Atencio recieved the plaque for his assistance in apprehending the suspect after officials with the Williams Police Department asked for the help of community members Aug. 7 in regards to a local Williams man wanted on a felony warrant. The suspect was sought in connection to two felony crimes, Nixon said. One charge related to property damage at a local Williams business, the second concerned a charge of assault against a young woman in Williams. The suspect was also sought in regards to a third felony warrant involving drugs.

"This information was remembered by one local citizen, Mike Atencio," Nixon said.

Atencio spotted the suspect as the wanted man drove through the streets of Williams. Remembering the WPD alert, Nixon said, Atencio called the police to confirm that the suspect was still wanted by authorities. Atencio remained on the phone with the police as he followed the suspect throughout the city of Williams.

"With this valuable information, Williams police officers were able to respond, locate and eventually apprehend the wanted suspect without serious injury to the public, officers or the suspect himself," Nixon said. "The wanted suspect was arrested and taken to the Coconino County Detention Center."

Nixon said that Atencio was a shining example of how a citizen can have a positive effect on those already victimized.

On a personal note, Nixon added that he has been friends with Atencio for roughly two years.

"He worked for Qwest and has probably done your cable and internet, things of that nature. He lived in Flagstaff at the time and he told me he wanted to move into Williams," Nixon said. "A few months later he finally did and we're real lucky he did. When he moved here he jumped right into Williams Youth Football, he coaches there and has a big fundraiser for youth football here and he coaches in Little League here. The reason I bring these things up is we need people, our citizens and our community members, to be role models for our youth. I truly believe he is one of them."