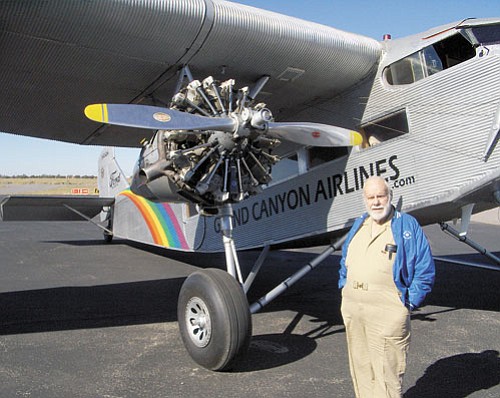 Photo/Jack Hadley Wayne “Chris” Christensen stands with the Ford Tri-Motor he flew in recently, thanks to the crew at Grand Canyon Valle Airport.

It was a clear summer day in northern Minnesota. The year was 1933 and "barnstorming," where pilots would fly their planes to a small town and offer the residents an opportunity to go for a flight, was at its height of popularity.

Wayne "Chris" Christensen, then six-years-old, was home with his father. They heard a load roar and going outside, saw in the sky, a large, shiny airplane. It landed in a nearby pasture and Chris' dad treated them both to a ride in the 1927 Ford Tri Motor transport. Thus began Chris' lifelong love of flying airplanes.

For Christmas in 1945, his sister gave him $100 for flying lessons and in the spring of the next year, Chris received his private pilot's license. Over the next 15 years or so, Chris purchased many planes, which had been damaged. He would fix them up, fly them for a while and then sell them. Aviation fuel, in those days, was 28 cents a gallon.

In the late '50s, Chris earned his commercial pilot's license and an instrument rating and went to work for Cair. Chris flew charter flights for them for several years and then moved on to other pursuits in life.

In 1992 Chris, by then a Williams resident in Sherwood Forest Estates, started construction on his own home-built airplane, a Fly Baby. He completed it in his garage and flew it for the first time in the spring of 2003.

A short time ago, Norm Gobeil, head of administration at the Grand Canyon Valle Airport, heard about Chris' first flight and last week invited him to come up and take a flight in their Ford Tri-Motor, thus completing for Chris, after 75 years, a full circle of flight in a Ford Tri-Motor.

The Ford Motor Company first introduced the Ford Tri-Motor in 1926. Distinguished by its shiny all metal construction and three engines, it was the first truly modern airliner. It offered a level of comfort and safety not seen before in an airliner. It has been used to fly passengers across the nation and the Grand Canyon, crop dust, and even as a fire bomber for the Forest Service.

The Grand Canyon Valle Airport and Air Museum is located at the junction of highways 64 and 180, 30 miles north of Williams. There one will find the Planes of Fame Museum, featuring fully restored aircraft from the '30s and '40s. There is also an auto museum with autos from the early 1900s and a new museum featuring aircraft, which flew passenger service over the Grand Canyon. There is also a group of very friendly people working there. For more information on the Valle Airport or the Tri-Motor, call (928) 635-5280.