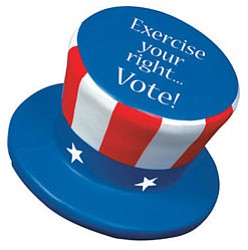 Arizona voters will decide eight ballot measures on Tuesday. One deserves more extensive individual discussion, but it doesn't take much deliberation on how to decide the other seven.

After careful deliberations, the News' editorial board recommends the following:

• Proposition 100: This measure prohibits the state government from charging any new tax on the sale or transfer of real property in Arizona. Although taxes are necessary for the government to protect public health, safety and welfare, the News has met few taxes it liked. Arizona currently has no such tax, and we would like it to stay that way. This one deserves a "yes" vote.

• Proposition 101: Proponents have labeled this the "Freedom of Choice in Health Care Act." They also might call it the "Hillary Care Pre-Emption Measure." It will guarantee Arizonans the right to make their own health care choices rather than give government the power to mandate health care. This, too, deserves a "yes" vote.

• Proposition 105: It's truly astounding that measures like this make it on a ballot. This proposition would require that any initiative that would impose additional taxes would require approval of a majority of the qualified electors in the state. That's right. A majority of all registered voters would have to vote in favor. The best turnout in a statewide election was 80 percent in the 1980 election. All voters who didn't go to the polls would count as "no" votes. So even with 1980's turnout, a tax measure would start out with a 20-percent "no" vote millstone around its neck. That is anything but majority rule. The people who actually vote - however embarrassingly few they may be - decide elections. People who want to have a voice in future initiatives - especially in approving them -need to vote "no" on this or never vote again.

• Proposition 200: Promoters - people in the payday loan industry - call this the Payday Loan Reform Act. The Arizona Legislature outlawed the payday loan industry in 2000 but granted a 10-year exemption that expires in 2010. The industry seeks through this initiative to stay in business. Payday loans trap people, plain and simple. Predatory payday lenders are spending millions to deceive voters on a ballot measure that has one goal - protect their profits at the expense of hardworking families who are desperate for cash and are willing to back a loan with a future paycheck. For these reasons, we recommend a "no" vote on this one.

• Proposition 201: Supposedly a homeowners' bill of rights measure, a more apt title might be a trial lawyers smorgasbord. This would provide a 10-year warranty on all new homes, along with rights to demand correction of construction defects or compensation. If a homebuilder or developer wants to offer a 10-year warranty on his homes, that's one thing. It's not the place of the state to do it by law. This is a horrible measure, and people should vote "no."

• Proposition 202: This so-called "Stop Illegal Hiring Act" is a ploy by the major employers of illegal immigrants to get around the state's highly effective employer sanctions law. It would eliminate use of the federal E-verify system as a benchmark test of an employer's due diligence in checking the immigration status of workers, which makes all the supposedly stiff penalties meaningless because it would be nearly impossible to prove someone hired illegally. People definitely need to vote "no" on this one.

• Proposition 300: This measure would grant Arizona legislators a pay increase to $30,000 a year. We need to increase pay for our legislators to attract better candidates that will make better decisions on our behalf. Without increasing pay, the wealthy and those with special interests will continue to make decisions that are not always in our best interests. We recommend a "yes" vote on this proposition.

If you haven't voted yet, make voting a priority on Tuesday. Your vote does indeed count. Have a say in your future. Do not remain silent by not voting. In summary, we recommend the following:

We'll see you at the polls.