City Christmas tree to arrive Nov. 28
Celebration to be held 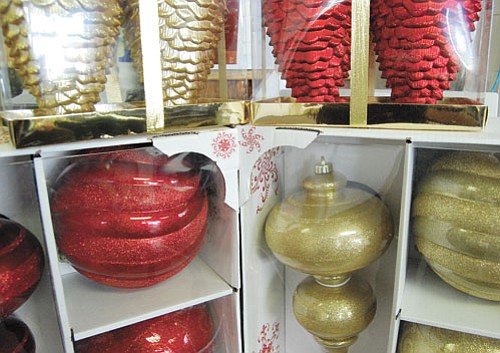 <br>Patrick Whitehurst/WGCN<br> Ornaments are also available for sponsorships at $10 each. The ornaments are currently on display at Mountain Joy along Route 66 in the downtown area.

Officials with the Magic of Christmas in Williams said they would hold the 2008 tree lighting celebration Nov. 28 in the downtown area. The event is scheduled to get under way at 6 p.m. Entertainment for the evening is slated to begin at 4:30 p.m., according to event organizer Diana Croteau. Grand Canyon Railway® is the title sponsor for this year's anticipated event.

"We have a local band that features Dan O'Neal, Ben Atkinson, Jim Cross and Kevin Johns," Croteau said. "Santa will arrive right after the tree is lit and there will be photo ops at the tree this year."

She said the committee has a number of plans for the 2008 Christmas season.

"We've put together a set of blank Christmas cards, and there are five different photos, of the Magic of Christmas in Williams. One of them is the logo and then the rest is actually different photos throughout town from Christmas of last year," Croteau said.

The Christmas card packs are available at a number of Williams locations, including Mountain Joy, Colors of the West, the Christmas Tree Gallery and Sun Mountain Properties. Committee members are also offering an ornament sponsorship. Ornaments are currently available for viewing at Mountain Joy along Route 66.

"There were a lot of people in the community that wanted to do some type of sponsorship, but couldn't afford the higher end ones, so we decided to purchase new ornaments for the tree and we're going to do a sponsor an ornament at $10 an ornament," Croteau said, adding that sponsors will receive a certificate for their sponsorship.

"I've already started getting sponsorships. People are doing it for their grandchildren. There will not be any actual writing on the ornaments, because of the outdoor weather. It would not stay on for very long," Croteau said. "We will (also) be selling magic reindeer dust, so be watching for magic reindeer dust."

Monument Park and the village at the east end of Williams will begin its Christmas cheer Nov. 6 in order to coincide with the first runs of the annual Polar Express in Williams. The tree is slated to arrive in Williams on Nov. 18.

"We're looking at getting it up north of town here again," Croteau said.

She said she is expecting large numbers for this year's tree lighting event. The Magic of Christmas in Williams Committee, besides being locally known, recently won the prestigious honor of winning a Governor's Award by the Office of Tourism in Arizona for offering its rural event. The group won the award in July of this year.

"I think people are going to want to come and see what it is all about," Croteau said. "I expect upward of 3,000 for the event this year. Coca Cola is again doing marquees on the backs of their trucks. There are 18 trucks again this year, all the way from Payson to Kingman it will be advertised. With the economy being down, we really need people to support and sponsor (the tree lighting), so any sponsorships you can do, whether it's sponsoring an ornament, buying a box of cards, whatever to be part of it and help us would be greatly appreciated."