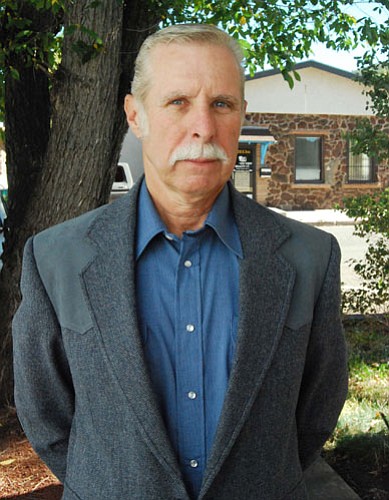 Two candidates will vie for a seat on the Coconino County Board of Supervisors next month. Incumbent Matt Ryan and northern Arizona resident Jack Darum are both seeking votes for the Nov. 4 election. Darum, a certified public accountant, said he will bring a lifetime of financial management with him to the board should he be elected. Incumbent District 3 Supervisor Matt Ryan has been in the position for 12 years and said he travels door to door in order to seek input from the community on issues that affect them.

Jack Darum, a candidate for the Coconino County Board of Supervisors in District 3, said he plans to accomplish multiple objectives should he be elected after the Nov. 4 election.

"One of the reasons I am running is I'd like to try and bring a higher standard of professionalism, experience (and) relative education to the board of supervisors. We've never really had any professional people on our board," Darum said. "I'm a certified public accountant, I have two masters degrees in government (and) I have worked for the state and the county, keeping in mind the county is a political subdivision of the state, so I've got 21 years combined in county and state government. Also keep in mind that both the county and the state operate from the same authority, which is the Arizona Revised Statutes. The other thing that I would want to accomplish is that I'd like to increase the public scrutiny and the intensity of looking at your county supervisor and being very critical of who we are putting on the board, look at their experience, what they bring to the job. Your county supervisor is the highest paid elected official you have here, not including say like the sheriff or the county attorney, they have a special pay structure, but your county supervisor, beginning Jan. 1 (2009) goes to $63,800 per year and remember when you vote for your supervisor, you don't vote for an annual salary. They will get, effectively, a four-year contract. When you vote for them, what you're doing is signing a four-year contract to pay that one supervisor over $255,000 for the next four years to sit on that board, that's over a quarter of a million dollars."

Darum said the Board of Supervisors in primarily in charge of the financial administration of Coconino County in his opinion.

"The power of the Board of Supervisors is the power of the purse. Ninety percent of what the board is about is to oversee taxing, spending and it's not just balancing the budget, it's really balancing your operations to insure that you balance your revenue inflows, expenditure outflows, maintain a positive fund balance, don't ever let that general fund fall into a deficit. Times are going to get tougher. I read that the city of Flagstaff is now looking at a $2 million shortfall; the state has problems in their budget. You'll get trickle down effect from the state to the county and one place the county can really be impacted from state government is grants. The Board of Supervisors, in my opinion, 90 percent of what they're there for is to manage the financial administration of this county. You should have some expertise to oversee the financial administration of this county."

Darum said one of the biggest issues currently facing District 3 would be the proposed theme park in Williams.

"There are a lot of articles (and) a lot of dialogue back and forth. That is an issue," Darum said. "First of all, if you establish a special district to encourage an economic development project such as the theme park, you're going to be looking at trade offs. I read where it was a possibility that they would waive the property tax. If you waive that, you want to get something back greater than what you waived, because you want to come out to where you have greater tax revenues as a consequence of increased economic activity. We don't want to get into a special district financing arrangement, effectively an economic incentive of some type, to a business that, five years after they open, they might have a padlock on their front gate. One of the things I would be curious to know about the project; it's going to probably be seasonal, you know what kind of snow storms we have across northern Arizona, it might not be open December through March. That makes it harder to be more profitable. Another thing about that particular project, whether you think it will be profitable in the long term, is whether their customer base and their patrons are going to be repeat customers. It would be very difficult for that project, in my opinion, to be profitable, if every one of their customers or patrons that come into the park is just a one time customer. Compare that to like Sea World in San Diego. I know there are southern California people and tourists, but they'll go back again and again and again. I think it's critical to have a consensus to whether that project has really a high probability of being successful in the long term, because you don't want to get into that and then have it shut down five to eight years later because it can't make it. One of the big issues for district three is the re-election of an incumbent, who wants to be on this board for four terms, 16 years, at a quarter of a million salary for another four years and a new candidate who has a body of experience, professional qualifications, education and has the credentials to back that up, to go onto this board, who brings a lifetime of experience in financial management for a job that is inherently financially responsible for the administration of the county. I think you got stark, distinct choice between two candidates here. If you base your experience on being an incumbent. If we did that, you would undermine democracy altogether, because you'd have the same person in power perpetually and that's not democracy, that would be a monarchy. You have to stand on your achievements, your accomplishments, whether or not you were a success before you got to the board or are you trying to tell me you're a success because you are on the board."

Darum added that he would like to see more communication between the Board of Supervisors and the people who live in Coconino County.

"One thing that I was not pleased with was when I opened my tax bill for my property taxes and I had an over 250 percent increase. I have two properties: my home, that was a 20 percent increase, and then my property, I have acres that I have my horses and my barn, that's my hobby, that went from $900 to $2,200. I would say this, if I had been on the board, I would have forewarned tax payers, because you know the assessor knew that this was coming six months eight months, maybe a year ago and nobody likes to open an envelope and get shocked like that. Everything the assessor did, I'm sure, is legal according to their assessment rules. There are a tremendous amount of rules that are imposed, through state requirement or through state statutes, but I think it would have shown a lot of class if the Board of Supervisors would have forewarned some people and said, 'Hey, we're looking at the potential tax increase for your property taxes,' and said this in January. One of the things that I would say is not good about government in general, especially the county, especially the Board of Supervisors, if we don't get good candidates to stand up and run. And you see supervisors term after term that are unchallenged, I think you're sending a real negative message and the message and the message is you don't even have to work to get re-elected."

Darum said he hopes people will take the time to research the best candidate for the position prior to Election Day and not vote arbitrarily.

"When you go to vote on Nov. 4 and you go down that ballot you're going to start with the president, congress and the state people and when you get down to that section where the county offices are, I want you to remember this if you live in District 3, every single county office is locked in," Darum said. "There's one candidate. One name. No Choice. You're going to come down and then you're going to see County Supervisor District 3. Two choices: candidate A and candidate B. What I would hope is, because you don't have any other choices to make about county government, which means you ought to have more time to think about voting for District 3 Supervisor. The message I'm trying to get out is you don't need to vote arbitrarily. You need to be critical."