Record breaker takes on the Canyon - and wins!
Man walks rim to rim in one day backwards 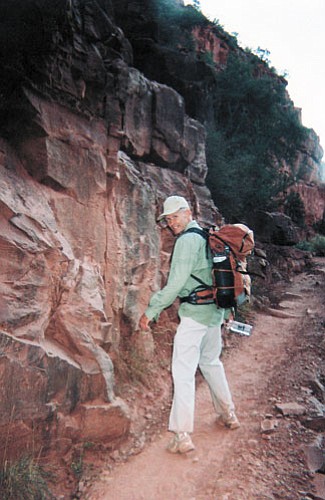 In late August, Bill Kathan traveled to the Grand Canyon to plan his next record-breaking adventure. At that time, he shared his plans with the News, promising to return soon with a story of his adventure and photos.

Kathan's backward hike began from the Canyon's North Rim on Sept. 24. At 5:53 a.m. he left via the North Kaibab Trailhead. He reached the Colorado River and Phantom Ranch at noon, resting for 40 minutes. He arrived at Indian Gardens at 4 p.m., where he rested for 30 minutes. Kathan emerged from the Canyon at the Bright Angel Trailhead at 9:30 p.m.

When he was finished 15 hours and 23 minutes later, he had hiked 24 miles backwards. He endured a 6,000 feet elevation change, accompanied by Benjamin Kastelic - his cameraman and water boy for the adventure.

"Out of all my records, this was by far the hardest of them all," Kathan said. "This is truly the unforgiving Grand Canyon."

Kathan carried a 22 pound bag containing food, water and extra supplies for the first 12.2 miles of the trek. When he started, he was hiking at a rate of four miles per hour and ended going less than one mile per hour. He crossed four creeks, where he had to remove his shoes and cross barefoot.

The trip was not entirely pleasant. Kathan said he tripped once and fell over a trail log. Having to walk with his head turned made breathing difficult, and he says that chlorine in well water made him ill. At times, Kathan said that he experienced dry heaves, vomiting, stomach pains and dizziness.

"The Grand Canyon is quick to temp you down into it, because of it's wonders and beauty, but going for a world record with a 22 pound bag becomes extremely dangerous," said Kathan, who is 56-years-old.

Last year, he logged 3,320 miles in the reverse position, from Hartford, Conn., to Newport, Ore., earning attention from Ripley's Believe it or Not! What garnered less notice is that he actually made two cross country trips in one, parking his van, walking forward three miles, walking backwards to his van and driving ahead for the next three-mile section.

Kathan does most of his training in the Prescott area, where his brother works as a police officer at the VA Hospital and coming up to Grand Canyon when he can.

"I train every day," he said. "Some of the training is just to keep my head turned around."

Kathan said his most recent adventure will be another chapter for the book he plans to write when he "retires" from record-chasing: "Mr. Bill's Book of World Records and Life's True Stories."