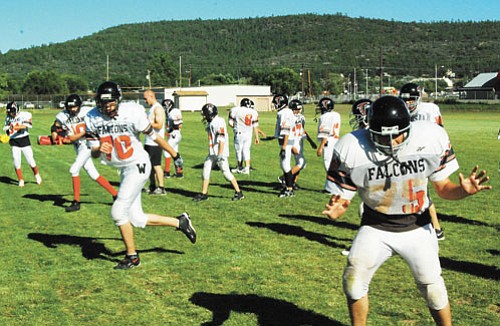 <br>Patrick Whitehurst/WGCN<br> The Williams-Elementary Middle School Falcons only lost two games in what came to be an impressive season for the Williams team.

The Williams Elementary-Middle School Falcons ended their impressive 2008 football season at 8 wins and 2 losses for the year. The Falcs went up against Chino Valley Sept. 30 with an ending score of Williams 35, Chino Valley 0. A strong Falcons' defense helped cinch the win for the boys, according to Coach Herman Nixon. Besides Nixon, Jeff Brownlee, Deniz Chavez and Phillip Martin also coach the Williams Falcons team.

"The Falcons' defense has only allowed three touchdowns to be scored on them during league play," Nixon said.

In nine games of play for the 2008 season, the Falcons have scored a total of 322 points to 40 points scored by their opponents, Nixon said. Falcon Adrian Solano is credited with two touchdowns in the Sept. 30 game, while Kohl Nixon, Oscar Nunez and Coty Baxter are each credited with one touchdown in the game.

Their strong season brought the Falcons into the Quad City Championship game Oct. 2 at Mile High Middle School in Prescott, where they took on the undefeated Mile High team. Williams came into the game at 7 and 1 for the season after losing to Mile High in a rough game held Sept. 16, where the Falcons took their first season loss at Williams 32, Mile High 14. Mile High proved too much for the Williams boys yet again on Oct. 2 as well, with the game ending with a final score of Mile High 25, Williams 8. The Falcons scored one touchdown in the loss, when Jeffrey Brownlee threw a touchdown pass to Adrian Solano. The Falcs pulled off a two-point conversion Jeffrey Brownlee connected a quick pass to Oscar Nunez in the end zone.

"The Falcons football program played schools that are all in 2A through 4A divisions, yet we took second place in this league, showing that the size of the school isn't what matters. It's the determination and desire of the players on the field that matters," Nixon said. "Our football team, on average, had 17 to 18 kids suited up for the game and the other teams had no less than 30, other than Chino who also had 18 suited up for the game. Our kids were never intimidated by the size of the other schools. They just went out and played their hearts out and came out on top. Mile High is a 4A division school, yet we gave them a harder game than any other team. The coaching staff are very proud of these student athletes and all they have accomplished this year."