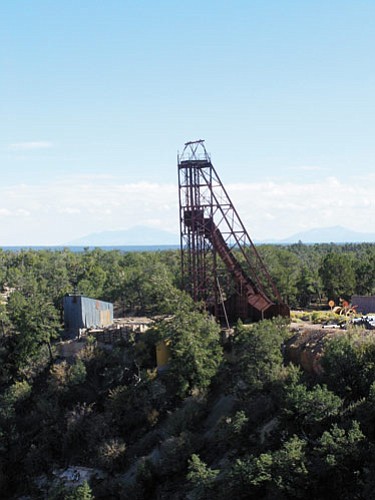 The cleanup of the Orphan Uranium Mine has become the subject of recent public meetings. Cleanup is set to begin next month.

The Park Service hosted meetings last week here and in Flagstaff to update the public on developments toward the cleanup of the Orphan Uranium Mine site.

Work starts next month to remove all man-made materials, including the headframe, from the site on Hermits Road. According to Greg Nottingham, an environmental manager from the Park Service, it's not the cleanup yet, just the start of the planning for it.

"We're not digging up dirt, we're not scraping anything off the site," he said. "We're just getting the debris piles and concrete and other things that are in our way out of the way so that we can sample thoroughly."

The cleanup is being conducted under the CERCLA - Comprehensive Environmental Response, Compensation and Liability Act. This is the regulation under which the EPA also administers Superfund cleanups though Nottingham said Orphan Mine is not classified as a Superfund site. Rather, he said, land management agencies like the Bureau of Land Management and Bureau of Reclamation work out of a different fund.

The claim for the Orphan Mine was staked in 1906. While it was mined some for copper, its most productive years were between 1953 and 1969, when it closed after yielding 13 million pounds of uranium. The government assumed ownership of the site in 1987. Since then, the Park Service has removed some equipment from the site and conducted enough preliminary testing to determine levels of contamination that warrant further investigation.

"We don't have blazing hot stuff out there but the amount that we do have of low level radiation - that is of concern," said Nottingham.

Clearing the site is the first step in an Engineering Evaluation/Cost Analysis that ends with a recommended cleanup alternative. Through the EE/CA process, they will assess how much and what kind of contamination there is and its risk to humans and the environment, then evaluate removal options.

The site has been divided into two parts, with the EE/CA being done in two phases. Operable Unit 1 covers about 31 acres on the Rim and up to 35 feet over the side. Operable Unit 2 includes all materials and disturbances related to mining beyond 35 feet below the Rim, and down more than 1,100 feet.

Cleanup will be a single project.

Clearing the site of its 22 buildings, mining equipment, foundations and concrete slabs is expected to take until March. Everything will be tested for contamination before it's removed from the site.

Sampling will begin after that, with recommendations available by the end of 2009. The EE/CA for the second operable unit begins in 2009 as well with a final recommendation by 2010.

"The reason why it takes a while is because it's very, very complicated," Nottingham said. "You have to determine the nature of contamination, what is out there and how it's moving around on the site. What risks does it pose, if any? Are there regulatory considerations? Then you come up with an array of choices."

Responding to a question, Nottingham said that the structures on the site had undergone cultural review and were determined not to be historically significant.

"The site is historically significant," said Jan Balsom, Chief of Cultural Resources. "The headframe, they're still making them. There's nothing architecturally significant other than its story and the location of the mining activity. Just being old doesn't make it historic."

Instead, they plan to restore the landscape and re-establish the trail built by the Civilian Conservation Corps.

When the cleanup is complete, the fence will come down and the Rim Trail will resume its original route along the edge.

While he had no estimate on a clean-up cost, "it will certainly be in the millions," he said.

While the site is under Park Service jurisdiction, CERCLA enables the government to hold some parties responsible and recover clean-up costs. Nottingham said that they are in discussions with some of those parties from the Orphan site.

"Ultimately we expect to see the cost recovered," he said.

All paperwork and research on the project is being collected at the park's Museum Collection where it can be reviewed by the public. For more information, contact Maureen Oltrogge at 638-7779 or Shawn Mulligan at (303) 415-9014.