Meet the candidates for Williams School Board - Herman Nixon
Candidates to meet Oct. 14 at WEMS 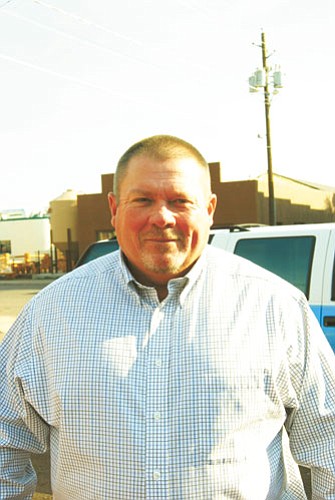 Williams voters will be asked to choose between five candidates for three available positions on the Williams Unified School District's Governing Board during the Nov. 4 election. Two of the five candidates are featured this week on the Williams-Grand Canyon News, including incumbent David Nenne and Williams Police Chief Herman Nixon. A story on local candidates Margaret Francis and David Miggins will appear in next week's edition. Incumbent Ron Stilwell was unavailable for comment as of press time. Members of the Williams Education Association plan to hold a forum for the candidates Oct. 14 at the Williams Elementary-Middle School beginning at 6 p.m. The public is encouraged to attend the event.

Herman Nixon, a candidate for the Williams Unified District Governing Board, said he decided to run for the seat in order to further his involvement with the schools in Williams. Nixon coaches both Little League in Williams, as well as middle school football. He has worked in the public sector for 29 years. He also coaches at the weight room at Williams High School.

Nixon said he believes it is time for a change at the school board level.

"If you look at it now, we have the same people who are volunteering for the programs. It's always the same ones. Why aren't we getting more of our teachers involved in these programs? Why is that? Because they don't live in our city," he said. "Upcoming, we'll be hiring new principals for both schools. I think it's important for a new board to get in there, again, to interview these people, put together some committees of citizens and business people and get the community involved, the parents involved, because we all want the same thing. We want a quality education for our children. We also need to look at what's going to need to be cut in the school program. With money the way it is, things are going to have to be cut, but if you

cut something, you don't want it affecting the education of your children. We need to focus on that. And that's what it's really all about. It's about the kids."

The cuts, Nixon said, would be a result of district, city, state and federal budgets constraints, but he said he believes that budget cuts can be handled creatively.

"There's going to have to be some major decisions made, probably on cuts. Where do you cut? I think we need to get creative to get through this budget crisis, which will probably go on for a couple of years. I want to make sure that our kids get a quality education. I want to get creative in some ways to try and keep our teachers here. In the last three years my son, who is now a seventh grader, has been through three different science teachers. That's an issue," Nixon said. "I've seen here where the children need help after school, but half our teachers have to leave right after school because they carpool, because of the gas prices. I don't blame them, but they all live in Flagstaff. What I would like to accomplish is trying to get some creative ideas, knowing there is a budget crisis, to try to retain our teachers so that these kids get to know them; they get to know the kids and get a quality education. I'd also like to get creative on some ways to keep our teachers in the city, as so many of them live in Flagstaff. Those are some of the things I want to accomplish. I think those are important for us and they are some of the important issues facing us right now."

Nixon, who said he has attended numerous management and budgetary schools, said the school board faces a number of hard decisions in the coming school year.

"You have to make some hard choices that you have to live with when you make cuts. That's just the way it is, but you need to explain that to the public. The public and your parents need to know why you're making these cuts and what your goals are for the school. If you get elected to this position, you've made a commitment," Nixon said.

"There's a lot of understanding of what happens at the school and your supposed to be there to set goals and make these hard decisions on the budgets that aren't always going to be popular, so if you're going to change things around, you've got to have more communication with media (and) with parents; it's got to be out there. I think, as a group, you can sit down and say 'How do we get this out to the public?' Do we put it out to the newspaper? Do we put out notices? We've got to do something that lets the pubic and parents and citizens know what we're doing. I think that's important," he added.

Nixon said he believes money to be one the biggest issues currently facing the school district.

"There's a lot of issues with upkeep of the schools, retaining teachers (and) one of the things that I see with hiring these new principals, which I think is a major obstacle coming into this next school year, is how much are you going to pay those principals? To get quality people, you're going to have to pay them," Nixon said. "Money is always going to be an obstacle and we've got be creative in ways to bring more money to our teachers, bring more money to the principals coming in, and still maintain that level of education that we have. It's going to be a tough couple of years. Anybody that's coming into school board, or running for school board, or an incumbent that's coming back, they know these issues are coming up."

Nixon said he believes the WUSD should treat both the high school and the elementary-middle school equally when it comes to decisions made from the governing board.

"I think with the new administrators coming into the schools, the board needs to work closely with those administrators and take what they've heard from the parents and other people in the community," Nixon said. "I think a lot of times the high school is the main focus and the elementary school and the middle school isn't focused on as much and I'm talking from a view of a person who is highly involved in the sports activities and things, because I really think it's important.

"First off I think that your grades are the most important thing. Having a son that's in the middle school, I think it's important for a school board member to have a child that's in the schools. I think they see a lot more than the person who doesn't have a child in the school. It doesn't have to be your child; it could be a grandchild or whatever. I think that we need to treat both of these schools equally. My own belief is that I don't see that happen a lot. I think that the high school is really the main focus and then we have the elementary-middle school, yet we have a lot more students in the elementary-middle school and those are your future high schoolers.

If he is elected to the school board, Nixon said he would not give up his other school endeavors, such as coaching.

"I've only lived in this community for three years, but I do have a child in the school. I'm heavily involved in the school programs and that's not going to stop. Even if I do get on the school board, I'm going to continue to be on the Little League board, I'm going to continue to help the kids in the weight room, but the reason I want on the school board is because I think I can make a difference. I use a common sense approach that I can get out there and explain why we're doing the things we're doing. I'm approachable. Anybody can come and talk to me," Nixon said.

"I think that we as a school board not only need to be the policy-makers and enforcers and take care of the budget, but we need to put people underneath us with the new hiring of these principals that we trust to go out there and do the job. I think we should be in constant contact with them. I think school board members have got to give 100 percent and it's not easy. The citizens out there and the parents need to know that I will always be approachable and I will always make common sense decisions and I will give 100 percent every time," he added.