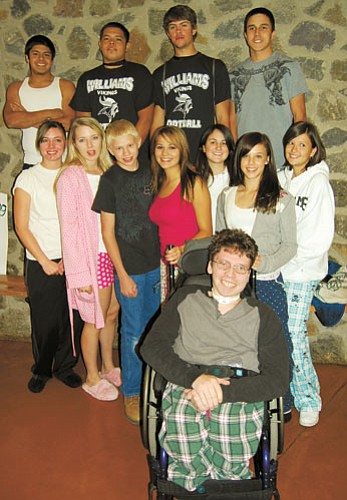 It's that time of year again!

Students at Williams High School (WHS) will be dressed in a wide variety of zany costumes this week as they take part in the school's Homecoming celebration. Homecoming week will culminate with a number of events scheduled to take place Friday at WHS.

The annual bonfire at the Bob Dean Rodeo Grounds will be held Thursday. Friday's events, according to student body president Bristol Jensen, will include a parade through downtown Williams at 1:30 p.m. Teachers at the high school will host a barbecue for students beginning at noon. The homecoming dance will be held at the high school as well, starting at 9 p.m.

Among the many activities that will occur at WHS throughout this week, a highlight for students is the notorious dress up days.

"Monday is pajama day, Tuesday is cross dress day, Wednesday is treasure hunter day, which goes with our theme for 'Vikings go on a treasure hunt,' and then Thursday is super hero day and Friday is spirit day," Jensen said.

Students involved in the various committees that worked on the festivities, she said, decided the theme for the 2008 homecoming.

"It can cover a broad range of subjects. You can have anything from the Pirates of the Caribbean to anything treasure hunting," Jensen said.

The students held voting for homecoming royalty Oct. 1, she added. The student body will vote on senior royalty tomorrow. Students are given a printout that lists the names of students in the school. For seniors, students voted on three classmates by circling their names. The homecoming king and queen will not be revealed until Friday during the Vikings homecoming football game in the evening, Jensen said.

"It's different this year because Miss Fred, our amazing advisor last year - for many years, was not here and Mr. Fleischman took it over and so we broke it down into more committees and we're taking more of a hold on it this year as students," Jensen said.

As student body president, Jensen said she has been heavily involved in the planning stages of the homecoming celebration.

"I'm kind of in charge of everything, making sure that the committee people are doing their jobs and that everything is in line," Jensen said. "There is the committee for the royalty, they have to pick out the sashes and crowns and then for the parade, for the lineup and trucks and things like that, for the games that we're going to do and then the bonfire for Thursday night, then the barbecue on Friday afternoon and then there's a committee for posters to put around school."

As part of the homecoming celebration, the high school will be dismissed at noon on Friday. Students will not be dismissed early at the elementary-middle school, however, according to school officials.