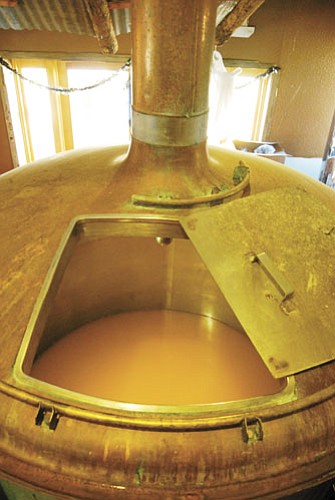 <br>Patrick Whitehurst/WGCN<br> Beer from the Grand Canyon Brewing Company, pictured at a stage in the brewing process, has been produced for a little over a year in Williams.

Beer is pretty popular for a lot of people. Locally made beer, for some, is at the top of the list when it comes to favorites. In Williams, that locally made beer can be found at the The Grand Canyon Brewing Company, located at 233 W. Route 66 in the downtown area. The locally produced beer will be available at this Saturday's upcoming "A Taste of Williams" event.

Owner John Peasley said he plans to bring a number of tantalizing flavors to the special event, including the brewery's Oktoberfest Vienna Style Lager, wheat beer and pale ale.

"We'll probably have our new logos there, the tap handles, so that people can see them. We'll also have design sheets with new logos, a little about the brewery, so people will be able to check that out," Peasley said.

The Taste of Williams event will be held from 6-9 p.m. at the Best Western Inn of Williams, located at 2600 W. Route 66. The occasion will feature offerings from local wineries as well. Food will also be on hand from a number of local restaurants including Buffalo Pointe, Wild West Junction, Red Raven, Dara Thai, Pine Country, Elk Ridge and a steakhouse from the Best Western. Java Cycle Café will also be on hand for the event. Local musician and vocalist Kerry Lynn Moede and keyboardist Susan Kerley will provide entertainment for the event.

"Our top sellers, currently, is the Pilsner, we have an American Pilsner we do, which is really good. Amber, pale and pilsner run neck and neck," Peasley said. "We have eight beers on tap: helles, amber, pale, wheat, raspberry wheat, oatmeal stout, pilsner and now we have our Oktoberfest lager."

Peasley said he and his family decided to get into the brewery business after visiting one of his favorite breweries in Phoenix called Four Peaks.

"From there we were in Williams already and we thought about a brewery. Of course when we checked the name for Grand Canyon Brewing Company and Grand Canyon Brewery and nobody owned them, nobody owned the Web site, the trade names, the trademarks, so this was a no-brainer. And it worked out to our benefit. We're not like a Phoenix brewery; we're not selling a lot across the bar. We do sell at Cruisers, but it's mainly wholesale. This is a huge tourist area and people want to try local stuff, so they get to try our beer," Peasley said.

Fermentation tanks located at the brewery are currently capable of making 30 kegs a piece, according to Peasley. Another tank produces 60 kegs as well, but plans are in place to add to that number.

"We've got four of those coming in right now and down the road we can actually have up to 15 of those in here," Peasley said. "We've also got our 35 foot bottling line. We're going to buy a canner to possibly start doing cans by the middle of next year."

Peasley said the beer from the Grand Canyon Brewing Company was recently picked up by another distributor as well that will bring the Williams-made beer to areas such as Kingman, Bullhead City, Yuma, Lake Havasu, Seligman, Ash Fork and other locations.

"We're looking to pick up a distributor in Phoenix probably by spring of next year with our bottles," Peasley said. "We'll have three different types of bottles, but we'll be able to produce somewhere around 1,600 bottles an hour. We'll have that going and the cans. The idea behind the cans is for some of the greener places, like Xanterra, to be able to get our cans in there, also the rafting trips. There are 18 rafting guides that buy Bud Light in a can and we can sell them our Grand Canyon Brewery in a can and it just makes the trip that much more. By Jan. 1 we should have our first bottles off the line for our distributor, that will be Coconino County only, and then we'll also transfer that over as soon we deem it necessary."