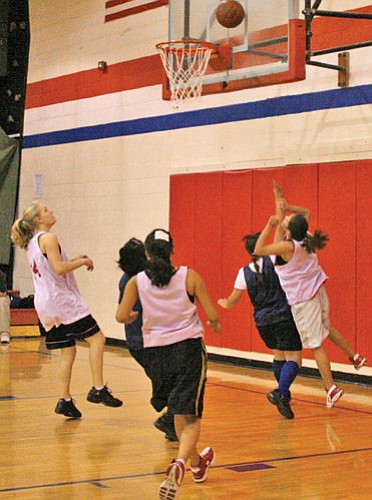 The Lady Phantoms play against Ash Fork in a scrimmage on Friday, Nov. 14.

As they prepare for the Williams Tournament the first weekend in December, the Phantoms got to put their skills to the test in a pair of scrimmages with Ash Fork on Friday, Nov. 14.

Coaches for both the boys and the girls were encouraged by their respective team's performance.

"They played well," said Lady Phantoms Head Coach Dan Lopez. "They played with intensity and they were good on defense."

The girls have just four starters returning, but the team has some depth and spent the summer playing in a league and at open gym night. The payoff is that their level of play this year is "like night and day" compared to the start of last season, Lopez said.

"We ran our offense pretty well for a opening scrimmage," he said. "Defensively, our intensity is very high and that's what we're looking for."

His goal for the girls is to make second or third seed in the regional playoffs.

"I think we're very competitive but we're in a very, very tough conference," he said, pointing to powerhouse A1 North teams like Williams and Fredonia, which won three state championships in a row. "It will be a dogfight."

Boys Head Coach Greg Walker said that in their first match-up against Ash Fork, the Phantoms showed themselves to be a smart team - "We can think on our feet pretty well," he said - and the guards were especially strong.

Though he has what he called a young team, with only three returning players, two of them starters, and more under- than upper-classmen, they have good chemistry that will help them against tough teams like Fredonia, Mogollon and Joseph City.

He noted that some of this current team beat Joe City in the summer league. He counts on reliable performance from core players Daniel Trenchard, Cruz Caballero and Daniel Celis, all of whom have a shot at All Conference honors.

He also noted senior Andres Velazquez, who has been a consistent hard worker in the program for four years.

Walker has another reason to be excited about the season - his assistant coach this year is his son and former Grand Canyon basketball luminary Tempy Walker.

"I don't think we know yet what we're going to get out of it but it's going to be a pretty special year," he said.