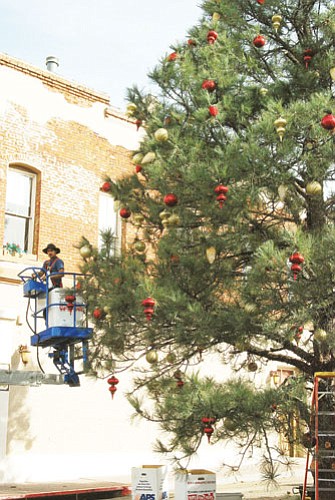 <br>Patrick Whitehurst/WGCN<br> The Mesa-based group Christmas Decorators, with the “Magic of Christmas in Williams,” prepare and decorate the community Christmas tree in anticipation for this year’s tree lighting, slated for this Friday at 6 p.m. Entertainment will begin near the corner of Second Street and Route 66 at 4:30 p.m.

Williams residents, as well as visitors to the area, are abuzz over the annual lighting of the community Christmas tree, to be lit at 6 p.m. Friday evening. This year's event marks the fourth annual celebration held in the Williams downtown area. The 2008 annual "Magic of Christmas in Williams" event will kick off at 4:30 p.m. and feature roving costumed characters, the strolling "Dickens Carolers" and entertainment by "The Good Ole Boys."

Santa Claus himself is slated to arrive immediately following the lighting of the Christmas tree, according to event organizers.

While many Christmas lights can already be seen in the community, such as the Christmas lights adorning the trees of Monument Park, to coincide with the annual runs of the Polar Express. The tree itself arrived in Williams Nov. 17 and was carried through the downtown area by crane. A number of agencies worked hand in hand to deliver the tree to its new home on the corner of Second Street and Route 66, including the Coconino County Sheriff's Office, employees of the Grand Canyon Railway®, APS crews, Williams Police Department officers, employees with the city of Williams and officers with the Department of Public Safety. Tree decorators with the Mesa-based group Christmas Decorators added ornaments to the tree for a number of days in preparation for the Nov. 28 lighting.

"(The decorating) went very well. It took them like two days," Croteau said. "We ended up having a little over 25,000 lights on the tree."

A large number of onlookers are expected in Williams for the beloved tree lighting event. According to Croteau, over 2,000 spectators attended last year's tree lighting. The annual show also earned a Governor's Award for the "Best Rural Event" for the state of Arizona in 2007 by the Arizona Office of Tourism. Members of the Magic of Christmas in Williams Committee accepted the award in July of this year.

Croteau said it is always stressful the week of the event when it comes to preparing for the busy tree lighting night.

"There are a lot of last minute details and of course we have the weather reports that we're dealing with," she said. "This is for the community and I hope everybody in the community turns out for the event. There are still sponsorship opportunities. It's not just about the tree lighting, it's about the whole holiday season."