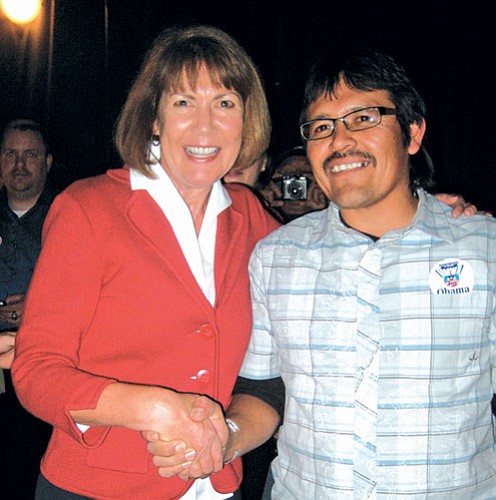 FLAGSTAFF, Ariz. - Election night was electrifying for hundreds of Democrats gathered at the Orpheum Theater as they cheered on the victories of Barack Obama as president-elect, Ann Kirkpatrick as new congresswoman-elect for District 1 and the victories of other Democrats throughout the country.

Kirkpatrick said one of her main priorities is education as she wants to assure that reservation schools continue to get impact aid.

Kirkpatrick continues to support funding for infrastructure on the reservations in order to help with economic development. Infrastructure includes roads, bridges, strengthening earthen dams and making sure Internet and cell phone service are available.

Kirkpatrick supports alternative energy such as solar and wind power. She said a comprehensive energy policy is needed in order to obtain energy independence and create jobs.

Kirkpatrick spoke to the large and festive crowd about the poor economy in the district with layoffs just being announced in Snowflake.

"Our economy is in crisis. Arizonans are struggling to keep up with day to day costs like rising gas and grocery prices and unaffordable health care," she said.

She said Washington politicians have cared more about corporate lobbyists than about working families.

To help, she will propose tax cuts for middle class families.

"Washington is in desperate need of change and voters clearly recognize that. I am proud to stand before you tonight and say that we have taken a giant step towards making that change a reality," she said.

Kirkpatrick said she looks forward to working with President-elect Obama, but she will always put Arizona first regardless of party politics.

"We need to set aside partisanship to change D.C.," she said.

Kirkpatrick said she will fight for Arizona's working families and her door will always be open.

"Working together we can change together," she said.

Kirkpatrick was born and raised in the White Mountains. She has served as state legislator, county prosecutor, educator, small business owner and community leader.

In the state legislature, she focused on tax cuts for middle class families, keeping ingredients for meth out of the hands of drug dealers, increasing teacher pay and expanding tax credits for solar energy.

She is the fourth woman in Arizona to be elected to congress.