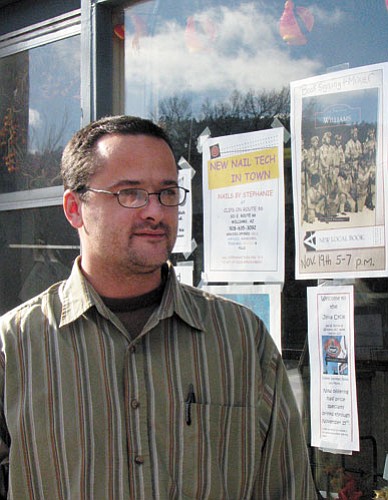 <br>Lynda Duffy/WGCN<br> “Williams” author Patrick Whitehurst stands with an image of his latest book, which was released Nov. 3.

The city of Williams - nearly 130 years old - is a town that showcases the varied history and culture of the southwest in a charming and unique, small town setting. Starting out as a railroad town in 1882, the area attracted ranchers, cowboys, entrepreneurs, families, saloons, opium dens and ladies of the night. Williams' pioneers were unwittingly creating history. Williams' history is now preserved throughout the pages of "Williams," as part of the "Images of America" series published by Arcadia Publishing.

"Williams" is also featured in a package of 15 vintage postcards that were selected from more than 200 photos seen in the book. The postcards retail for $7.99 and the book sells for $21.99.

Penned by local author Patrick Whitehurst, "Williams" hit city streets Nov. 3. "Williams" - and Whitehurst - will be the center of attention during a Williams-Grand Canyon Chamber of Commerce Ambassadors Mixer 5-7 p.m. Nov. 19 at the Williams-Grand Canyon News, 118 S. Third St. Everyone is invited to attend a special book signing party that day and meet Whitehurst in person. Books and postcards will be available for sale that night.

A love of history compelled Whitehurst to write "Williams."

"I've always been a fan of history, particularly small town and regional histories," Whitehurst said. "Williams has helped shape the landscape of northern Arizona, so I think it was important to get our city's story out there."

Whitehurst, a full-time reporter for the Williams-Grand Canyon News, spent three months writing the book earlier this year. Most of the book was written nights and weekends since Whitehurst continued to work full-time and obtain his bachelor's degree from Northern Arizona University.

"I viewed over 300 photographs and selected the best to include in the book. I still have a shoebox at home filled with the photos I didn't use," he said. "From start to finish, it took a little over three months to gather the photographs, write captions for each photo and research Williams' history to write the book's 10 chapters."

Whitehurst graduated from NAU in May on nearly the same day he completed the book.

"The book is dedicated to Andrea Dunn," he said. "She was instrumental in helping me find the materials and research I needed to compile the book."

Whitehurst also gives credit to Bob Dean, George Garcia of the Williams Historical Society, Williams City Manager Dennis Wells and Jackie Banks and Margaret Hangen with the Kaibab National Forest. He also credits his wife Colleen for being supportive while he was writing the book.

"When it came to research for "Williams," the task was fairly easy. Not only do a number of individuals remain in the community who have a great deal of knowledge on the city's history, but my job as a reporter for the News allowed quick access to the city's past through the newspaper's archive collection."

"Williams" features the Bill Williams Mountain Men, a history of the Williams-Grand Canyon News, the railroading and logging industries and the 1984 bypass of Route 66 in Williams. The book also includes the story of Bill Williams and the formation of the town itself.

"I think readers will learn a number of interesting things they may not have known regarding the history of Williams, such as what brought about the large statue of Bill Williams on the west end of the city, what led to the creation of the Bill Williams Mountain Men and how the city managed to prosper following the Interstate 40 bypass of old Route 66, as well as much more," Whitehurst said.

"It's my hope that those who live in Williams, as well as those who visit the city, will learn how rooted this city is to the overall community of northern Arizona," he said. "I hope parents, as well as teachers, use the history of the community to teach the local youth more about the heritage under their feet, just as I learned about my own heritage in California at a young age."

"I think anyone who loves Williams, the old west, and history will treasure reading and viewing Patrick Whitehurst's photographic history 'Williams,'" stated Doug Wells, publisher of the Williams-Grand Canyon News. "Patrick's book is a must read for anyone who wants to relive our early history. It truly places you back in time."

"Williams" is not the first book Whitehurst has published. In 2005, he self-published a book featuring local folklore, "Legends, Ghosts and Superstitions of Williams and the Grand Canyon." That book is still available at Java Cycle Café and the Holiday Inn Gift Shop.

A native of the Monterey Peninsula of California, Whitehurst moved to Williams in 1994. He has two children, Ben and Libby. He is a member of the Arizona Author's Association and also serves on the NAU Publications Board. When not writing for the newspaper, his online blog or his various fiction projects, Whitehurst finds time for his other passions, which include oil painting and surfing on the California coast.

"Williams" can be purchased at the Williams-Grand Canyon Chamber of Commerce and Java Cycle; online at barnesandnoble.com, overstock.com and amazon.com; or through the publisher at (888) 313-2665 or arcadiapublishing.com.

History of the Grand Canyon as seen through postcards
Tusayan area explored in new book
Hobby leads to a book
Book signings to be held through December
Gateway to the Grand Canyon enters into history
Contact Us
Submit Questions, Comments, or Story Ideas