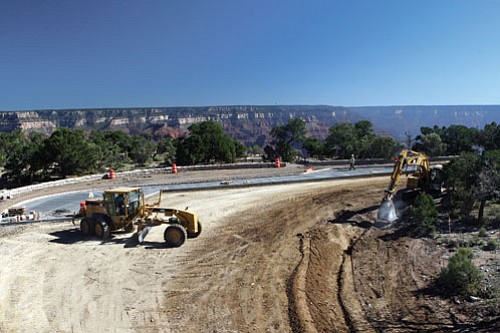 Photo courtesy National Park Service Contractors work on one of the overlooks on Hermit Road over the past summer. The project is complete and the road reopens with a ceremony this Saturday at 1 p.m.

After being closed for nine months of rehabilitation, Hermit Road reopens this Saturday with a ribbon cutting ceremony at 1 p.m. It will be at the new shuttle stop near the Hermit Interchange, west of Bright Angel Lodge and Kolb Studio. The public is invited.

After the ceremony, which will include remarks by park Superintendent Steve Martin, there will be cake and punch and the road will be opened for pedestrians and cyclists. There will also be limited shuttle service along the road that day untl 6 p.m.

Work started in February on the seven-mile, historic road, which was built by the Santa Fe Railroad.

It was named for the French Canadian prospector Louis Boucher, who lived there for more than 20 years around the turn of the century. In addition to mining, he also farmed in the Canyon and raised goldfish at Dripping Springs, about six miles down the steep Hermit Trail. The Santa Fe Railroad constructed the route in 1912 and two years later added the unique limestone building designed by renowned southwestern architect Mary Colter. Today, that building is listed on the National Register of Historic places and, as in Colter's day, provides refreshment and a gift shop for sightseers.

The Bureau of Public Roads and the Park Service designed and constructed the road that was just repaired between 1934-35.

It also added a sheltered bus stop at the Hermit Road Interchange and improved five and a half miles of Rim Trail, including construction of a new three-mile, multi-use Greenway Trail for bicyclists and pedestrians.

"The National Park Service is really excited to reopen this popular, historic road with a new and improved look for people of all ages and abilities to enjoy," said Martin. "People can now safely and comortably enjoy and contemplate the scenic beauty of the Grand Canyon from Hermit Road via foot, bicycle or bus. This project illustrates how we can improve the infrastructure of the park to meet current demands and standards, while still protecting the Canyon's resources."

Hermit Road is a popular destination for approximately one million visitors each year, with its nine overlooks, the Hermits Rest building designed by architect Mary Colter and the Hermit Trailhead. The overlooks are popular sites for viewing the sunset.

Although the 1935 Hermit Road was constructed as a scenic drive that could withstand automobile travel, it was not built to handle the volume of traffic and heavier vehicles seen today. Even with periodic maintenance over the years, the road had deteriorated to a point where it was unsafe for bicyclists and pedestrians.

In addition to safety and accessibility, protecting the historical integrity of Hermit Road was an important aspect to this project. The original metal hand railings at each of the overlooks and the rustic-style stone masonry culvert headwalls and retaining walls were retained. Most of the Greenway Trail follows the alignment of the 1913 Hermit Rim Road.

Minimizing disturbance to the natural and cultural environment and restoring damaged areas was another significant aspect of the Hermit Road project.

Areas were restored that had been damaged by social trailing and other impacts. To better protect an endangered population of sentry milkvetch and adjacent suitable habitat, the parking area and access-road pavement was removed from Maricopa Point. A new Maricopa Point shuttle bus stop was created west of the rehabilitated parking lot, and a new accessible pedestrian path was built to Maricopa Point.

Visitors have had limited access to Hermit Road and associated areas since April due to the rehabilitation project. After Nov. 15, shuttle bus service will not resume on the road until March 1. Private vehicles will be allowed to drive on Hermit Road starting Nov. 16-Feb. 28.

The project was funded by entrance fee money and was a private-public collaboration. Construction was performed by Fann Contracting, Inc. out of Prescott, Arizona. Project oversight and construction management was performed by the Central Federal Lands Highway Division of the Federal Highway Administration.

The Grand Canyon Trail Crew, with the assistance of the Student Conservation Association (SCA) and American Conservation Experience (ACE) crews, worked on portions of the Rim Trail and provided stone masonry and viewing area improvements at some of the viewpoints. And the Grand Canyon Revegetation Staff assisted with restoration work at the overlooks and along the entire road with help from SCA, ACE and Sierra Club volunteers.