Who, what, and when - but maybe not why or how 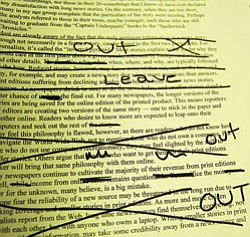 Journalists from the Pacific Ocean to the Atlantic Ocean are hearing the same thing these days. Write smaller stories. Give the bare bones of the story and leave everything else out. Nearly every form of the craft, from hard news to feature stories, stop at about 500 words - roughly the size of the description on the back of a paperback novel.

The reason behind the current edict is the belief that readers no longer wish to read longer stories. They want fast, decisive news. They want to get through the paper quicker when they sit down to catch up on the news.

Industry magazines, such as the November 2008 edition of "Presstime," report that smaller stories attract a younger audience. What age are they talking about? Not those in their 30-somethings, nor those in their 20-somethings that I know of, have ever declared any dissatisfaction with long news stories. On the contrary, when they are too short, many in my age group complain that the particulars of the story were missing. Perhaps the analysts referred to those in their teens, maybe younger, such those who are still waiting to graduate from the "Captain Underpants" books to the "Spiderwick Chronicles."

Most are already aware of the fact that the truly pertinent information in a news story, though not necessarily in a feature story, can be found in the first two paragraphs. For journalists, it's called the "inverted pyramid." Most stories explain to the reader why they should care in the first place about a given article, followed by background information and other details. The five Ws: who, what, when, where, and why, are typically followed by the how. Reduced stories, however, may leave some of that out, such as the how and why, for example, and may create a news story that raises more questions than answers.

Print editions suffering from declining ad sales will benefit from shorter news stories, however. As newspapers shrink in size, so do the news holes, and smaller stories stand a better chance of making the final cut. For many newspapers, the longer versions of the stories are being saved for the online edition of the printed product. This means reporters and editors are creating two versions of the same story - one to stick in the paper and the other online. Readers who desire to know more are expected to leap onto their computers and seek out the rest of the story.

Many feel this philosophy is flawed, however, as there are readers who do not know how to navigate the World Wide Web, not to mention those who do not own a computer. For those who do not use computers recreationally, they may feel slighted by the shift to smaller stories. Others argue that readers who want to get through their print editions quicker will bring that same philosophy with them online.

Many newspapers continue to cultivate the majority of their revenue from print editions as well, while income from online sales remains questionable. To sacrifice the money-maker for the unknown, many believe, is a big mistake.

I for one fear the reliability of a new source may be threatened in the long run due to shrinking coverage and smaller stories in print editions. As more and more citizen journalists report from the Web, long time news sources find themselves competing, not just with each other, but with anyone who owns a laptop. Writing smaller stories in print editions, with less information, may take some credibility away from a news source and could leave readers shopping for more. Yes, they may look online, but not necessarily at the newspaper's Web site. For an online newspaper to be successful, the print edition must also be successful and that may not be the case if readers grow dissatisfied by smaller stories lacking in information. They may very well feel they will get more of the same online. In order to build an online audience, newspapers might consider beefing up the reliability of their printed product rather than chopping it.