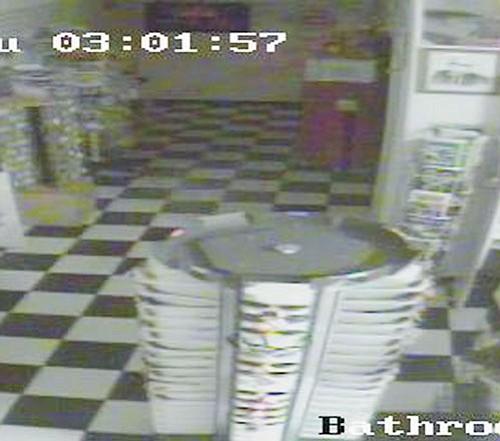 <br>From surveillance camera<br> Cameras at Twisters Route 66 Soda Fountain picked up what appeared to be a ghostly apparition Oct. 16.

The owners of Twisters and the Route 66 Place in Williams are still wondering what tripped their security cameras during the early morning hours of Oct. 16. It wasn't a burglar or a short in the camera system itself, as there was something visible on the film, a floating white shape, translucent and smoky, which seemed to "walk" from one section of the room to the other. According to owner Jason Moore, the Oct. 16 footage lasted for less than half an hour.

"I can access my camera system from home on the Internet and there were five alerts in the bathroom hallway from 3:01 in the morning until 3:18 in the morning," Moore said. "After 3:18 there were no other cameras that went off. I checked all the other cameras. We have another camera that gets a different angle of this object as it's walking through and it didn't set off. The camera that sits next to that, which looks straight down at the register, didn't set off. The camera in the west gift shop didn't set off, where this object had come out of, so only one camera basically picked up a shadowy white figure moving from the old gas station part, which was built in 1926, into the new part of the building that was built in the 60s. This thing, whatever it was, just a white transparent cloud, it does look like a human figure in a cloud form, just basically appeared out of nowhere and walked down the hallway, approximately 15 feet and just disappeared into the bathroom. Why? I don't know."

Moore said the camera system was installed one year ago.

"The camera system is set to motion - motion only. You've got different sensitivity levels, but we've got ours set to where it only goes off when motion is sensed," Moore said. "The cameras are constantly recording 24 hours a day, so whenever there is movement it starts, I think, 10 seconds before that movement and records up to that movement and it continues to record after that movement for, I think,30 seconds."

After the initial appearance of the cloudy form, Moore said the camera didn't trigger again for another seven minutes.

"There were four more frames where the camera set off on motion again," he said. "You can see round orbs, just round balls of energy or whatever you want to call it, floating through the air, floating around right where the object was seen at 3:01 in the morning."

Moore said he is considering all possibilities when it comes to identifying the mysterious apparition.

"I don't know what to say about it. The video kind of speaks for itself. Quite frankly I don't have the slightest clue what it would be," Moore said. "It would have to be some sort of solid matter to set off the camera. Like I said, we've only had our cameras up and going for about a year, but we've never caught anything like that on our camera. In fact our cameras very seldom even trip. We've got an outside camera that goes off and on all night long, because we've got traffic that picks up the cars as they go down route 66, but the inside cameras just don't set off unless there's motion. I've checked every morning since that incident and I haven't seen anything since."