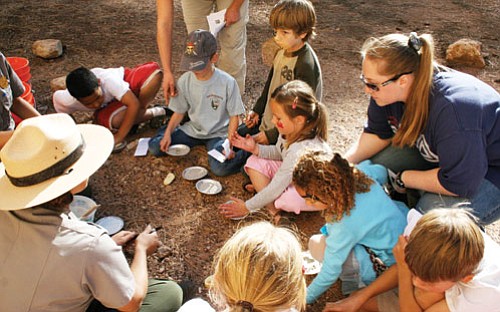 Jackie Brown/GCN Mostly local youngsters attempt the casting technique that biologists use to bring back a record of animal tracks in the field.

When park biologist Eric York unexpectedly died last year of plague contracted from a mountain lion he studied, Grand Canyon's wildlife lost one of their most passionate advocates.

What York's colleagues didn't want to lose, however, was the sense of energy and direction that he had brought to the park's staff and research, particularly in studying mountain lions and getting their story out to visitors.

Last Saturday, that spirit was celebrated in the first annual Wildlife Day hosted by the park in York's honor.

"He was so inclusive in everything he did," said interpretive ranger Lori Rome, who helped organize the event. "He wanted to share his expertise and to feed his research to the interpretive staff. He was always involving people in the work."

She had spent time in the field with him the summer before he died, tracking a mother mountain lion and tagging her cubs - an experience she described in an article as one of the most amazing of her career. It was about a year ago that York contracted plague while performing a necropsy on that mother lion, dying a week after exposure on Nov. 2.

"When he first died a group of us got together to talk about some ways to honor his life. It evolved and morphed into different ideas," Rome said.

In the short term, she said they pushed hard to see some of York's initiatives through, including getting mountain lion road hazard signs up along Desert View Drive. Then they started looking at a lasting legacy.

"We wanted to finish those things that were important to him," said Rome. "When we were looking at some other ways to honor his life, as humble as he was, it wouldn't be a statue. It would be something that he lived - bringing understanding of wildlife to people."

She and Rosa Palarino, York's colleague from the Science Center, began planning an educational day that would tell not only the story of the park's wildlife, but York's role in making it more complete.

"We had no idea what the lion situation was here," said Palarino. "He didn't just do the research, he set up the foundation and the structure for it. Once he learned the skills for tracking lions at Grand Canyon, he was trapping lion after lion."

Under the program, which began in 2003, more than 15 lions were fitted with collars. York had pushed for the road warning signs after at least two of his research subjects were killed by vehicles.

The event included a demonstration of the telemetry tools used by York and other biologists to track wildlife in the park, as well as a touch table with pelts, skulls, horns and antlers provided by Arizona Game and Fish. The Adobe Mountain Research Center brought live animals and visitors could view video of York at work in the field. There were also hands on projects and ranger programs on wildlife.

There was a special presentation by Grand Canyon fourth and fifth graders on living with wildlife and a talk on mountain lions by expert Kevin Hansen.

The Grand Canyon Association's Adopt-a-Lion program was also launched in conjunction with the event in York's honor.

Rome said they plan to make it an annual event but will schedule it for May, around York's May 2 birthday.