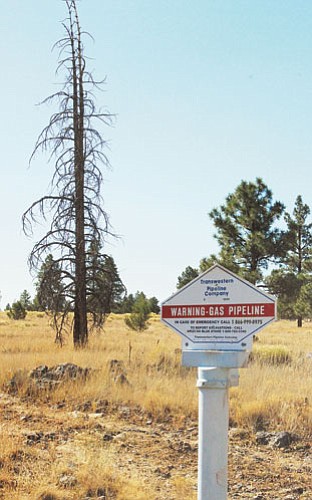 <br>Patrick Whitehurst/WGCN<br> Investigators are still trying to determine the cause of death for a body discovered in a wooded area north of Williams.

An investigation into the circumstances surrounding the discovery of a body north of Williams remains ongoing, according to authorities. The partially mummified remains were found hanging from a tree by horseback riders Oct. 26, according to police reports. The remains are thought to be that of a Native American male between 22-25-years-of-age. Investigators said they believe the cause of death may be a suicide, according to Det. Larry Thomas with the Coconino County Sheriff's Department.

"Basically some ladies were out horseback riding and came upon said body. At the time, the individual was hanging from a juniper tree. It appears, though I am not going to make any definitive statement, to be suicide," Thomas said, adding that there were no signs of foul play or trauma on the body, though further examinations are pending. He said the remains were already in advance stages of decomposition. Rough estimates indicate that the body may have been decomposing for at least six months. No identification was found on the body, Thomas said.

"What we're looking at doing is they're going to extract DNA from the remains," Thomas said, adding that the DNA will be added to a national database in the hopes that a match can be found.

"If someone else has listed them as a missing person, sometimes someone will put family DNA in," Thomas said. "We have a forensic dentist that is going to do a dental analysis. That will also be entered into a database. At that point, the next thing would be, we'll probably pull NCIC missing person data entries for a regional area."

Thomas said he wasn't surprised that the remains were not found sooner, due to the fact that the body was found in a heavily treed area and would not be visible by passengers riding the train to Grand Canyon.

"It's pretty heavily treed. Visibility is probably 20-30 yards. No one on the train would see him," Thomas said.

An autopsy on the remains was held Oct. 27 in Flagstaff. An initial investigation was conducted by the Coconino County Sheriff's Office, though the case was subsequently handed to investigators with the Williams Police Department, after detectives found they had made a GPS mapping error in relation to the body's location, placing the case in the city's jurisdiction and not in the county's jurisdiction. Since then the case has been handed back to the Coconino County Sheriff's Office. Williams authorities said this was due to the fact that county officials had already taken the remains from the scene and collected evidence pertaining to the case, leaving nothing for Williams officers to work with in conducting an investigation.

"They're going to complete the investigation and we're going to assist them in whatever way we can," said Williams Police Chief Herman Nixon.