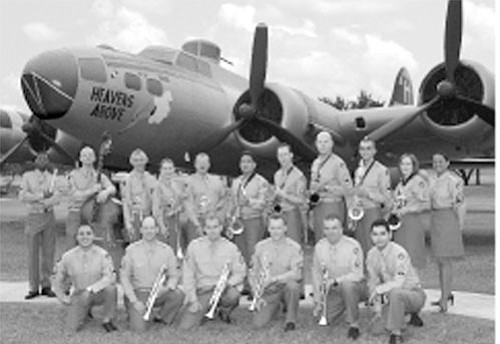 <br>Submitted photo<br> Members of the United States Air Force Band of the West will perform this Saturday at Williams Elementary Middle School beginning at 7 p.m.

Musicians with the United States Air Force Band of the West will perform at the Williams Elementary-Middle School this Saturday beginning at 7 p.m. The Dimensions in Blue Jazz Ensemble will play a number of tunes when they visit Williams. The band itself is based from the Lackland Air Force Base in Texas and has performed for presidents, heads of state and for dignitaries from around the world.

Tickets for the event are free and can be picked up at the Williams-Grand Canyon Chamber of Commerce, located at 200 W. Railroad Ave.

The Dimensions in Blue Jazz Ensemble plays an average of 100 performances a year, logs over 20,000 miles of travel each year and has entertained over 500,000 jazz fans. The group typically plays a wide range of music, from jazz classics by Duke Ellington, Count Basie and Woody Herman. The band is known for recreating the look and sound of the Glenn Miller Army Corps Jazz Band.

The Williams-Grand Canyon News, the Williams Elementary-Middle School and the Williams-Grand Canyon Chamber of Commerce sponsored the Dimensions in Blue Jazz Ensemble. Dimensions in Blue have performed in high schools, colleges and media-sponsored tours throughout Texas, Arizona, New Mexico and Louisiana. The group has played as feature performers at the Texas Jazz Festival, the Texas Bandmasters Association Convention, the International Association of Jazz Educators Convention, the Corpus Christi Jazz Festival, the Galveston Jazz Festival and the San Antonio "Fiesta in Blue."