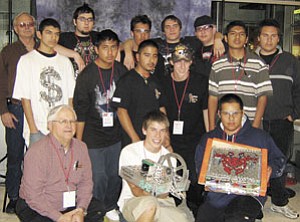 The Williams High School BattleBots team, under the tutelage of teacher Larry Gutshall, placed sixth and 16th respectively in the recent national competition.

Williams High School (WHS) students got a chance to show their stuff in the mid-west recently when the school's BattleBot team, the "Slab Crabs," traveled to Minnesota to take part in the BattleBot IQ national competition, an event that pits robot against robot in a remote-controlled battle. Called the "Rumble in the Rotunda," the competition was held April 25-28. In prior years the Slab Crabs traveled to Miami, Fla. to take part in the national BattleBot IQ competition. This year the competition was held in Minneapolis - St. Paul, Minn. at the Mall of America. WHS teacher Larry Gutshall, along with his wife, Carol, and Williams resident Walt Eastland, accompanied the students on the recent trip. Gutshall teaches the industrial manufacturing class for Williams' students.

"It snowed, but we had an excellent trip. This was much better than going to Miami," Gutshall said. "It was cheaper. We took 12 students this time, 15 people, and it was the cheapest trip that we've taken so far. We didn't have to rent cars. The local transportation was great. They hauled us back and forth from the airport and the hotel and there was transportation to the mall about 12 times a day."

With a number of state victories under their belt, the Slab Crabs also seem to inch closer and closer to a national victory each year. Last year the team failed to make the finals at the national level. This year they battled other robots with two of their own, the original Slab Crab BattleBot and the newest addition to the school's arsenal, the Slab Crab Revolution.

"From our calculations we made sixth in the nation with the oldest robot that we got as a matter of fact. The newer robot got about 16th overall," Gutshall said. "And this is a National Tooling and Manufacturing Association event. It's the one that they send the state winners to. They gave us $3,000 to help do that."

Roughly 20 teams took part in the recent competition in the same class as the WHS Slab Crabs, Gutshall said.

"Our newest robot (Revolution) lost right off the bat, so he had to go in a losing bracket," Gutshall said. "It was tough. The original Slab Crab won through and was in until the semi-finals."

Transporting the BattleBots, made at WHS with a number of robotic weapons, proved to be little trouble at the airport, Gutshall said.

"We managed. It's always interesting going on the airplanes with robots, because they have batteries and wires and all the things that they look hard at, but it wasn't any problem," Gutshall said.

He said the WHS students enjoyed themselves once they arrived in Minnesota.

"The kids did fine. They didn't want for something to do," Gutshall said. "We spent three nights there."

Plans for next year's state, and hopefully national, competitions are already under way, where Gutshall said the students will try to build a "meaner" robot.

"(Student) Steven Webber is already working on the new drawings," he said.

The Slab Crabs team received "wonderful" support from the community, according to Gutshall.

"Our tax credit money is just gold. We were able to pay all of it with that," Gutshall said. "Tracy and Sons Plumbing treated us to the amusement park and the aquarium, which wasn't a small amount for 15 people. He really did a good thing for us and it was very educational. The aquarium, because we had enough money to get the back scenes pass, the tour that went through it, and they had a biologist that went through with us. It was really cool."