Weekend of events to mark 75th anniversary of CCC 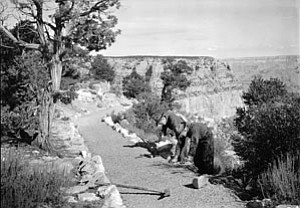 Members of a CCC crew work along the Rim Trail east of Verkamps.

On March 31, 1933, President Franklin Delano Roosevelt signed legislation for what was to become his most popular New Deal program: the Civilian Conservation Corps (CCC).

By 1935, more than 500,000 young men were working in national forests, state parks and national parks and monuments.

"Save the soil, save the forest, save the young men" were the bywords of the day.

The Park Service and Grand Canyon Association will celebrate the CCC with an exhibit entitled "It Saved My Life: The Civilian Conservation Corps at Grand Canyon, 1933-1942."

There will be an opening reception at Kolb Studio on Friday, May 30, from 7-9 p.m. The exhibit runs through Oct. 19.

The Park Service has also published a walking tour brochure highlighting CCC projects throughout the Village. When you visit, take time to appreciate the lasting accomplishments of these brave men. The Bright Angel Trail was widened and improved, and the trail's resthouses were products of "Roosevelt's Tree Army." The transcanyon telephone line was particularly challenging, and the men were proud of their work when it was completed.

The Rim Trail between Verkamp's Curios and Yavapai Point, the rock wall between El Tovar Hotel and Bright Angel Lodge, the log benches along the paths-all were made by "The Three Cs."

Some of the most significant contributions to Grand Canyon National Park were the lasting works of these young men and their leaders.

On May 30-June 1, GCA and Grand Canyon National Park will host a CCC Symposium. Learn more about the rich history of the Civilian Conservation Corps through history walks and presentations by scholars.