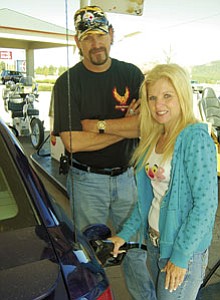 The Gibson family fills their tank prior to leaving Williams on their way back to California. The family tailored their vacation this year in order to absorb the higher cost of gas. A sampling of gas prices in town (right) show that Williams continues to get closer to $4 a gallon for unleaded fuel.

Gas prices in Williams continue to inch closer to $4 a gallon in Williams, lower than some Arizona cities, but higher then others. As of May 19, national gas prices rose for their 13th consecutive day. The national average sat at $3.794 for a gallon of unleaded fuel - a number that continues to grow daily. In Williams, prices ranged between $3.59 and $3.99 for unleaded, leading many to believe that prices will top $4 as the summer season kicks into gear. Gasoline prices have already topped $4 in Alaska, Chicago and Long Island as of May 19.

Seleem Saya, owner of Bell Gas and the Mustang station at the east end of Williams, said he has seen a drop in sales due to the rising cost of fuel.

He said he does not believe prices will drop any time soon.

John and Barbara Gibson from Taft, Calif., said gas prices had an impact on their recent trip to northern Arizona.

"It shortened it quite a bit," John Gibson said, who said he thought the price of gas was "robbery."

"We hiked the Grand Canyon, we saw the crater, we went to the caverns (and) Sedona," he said. "We still drove around. It still cost us gas, we had to forfeit about $500 for gas to make it up here."

"We planned on higher gas prices," Barbara Gibson said. "We had to avoid the train ride and ATV rides, because we had to put gas in the car."

Donna Eastman-Liddle, president and CEO of the Williams-Grand Canyon Chamber of Commerce, said the rise in gas prices has not had an effect on visitation numbers, though the spending habits of those visitors has changed. Gas prices were also to blame for the cancellation of the Great Northern A'Fair Carnival at this year's Rendezvous Days event (see related story below).

"Our B, B and B (bed, board and booze) numbers are still staying pretty strong, they've gone down a little bit, but I know the next group of figures are coming in. I haven't gotten those yet from the city, but it should be a little bit stronger because of the spring break," Eastman-Liddle said. "That month was extremely busy. It's a 30-day delay in when those taxes get collected and when they are actually reported, so I don't know where we'll be. I think we're 14 percent ahead to date, which isn't bad for B, B and B, and that would be just your restaurants and hoteliers. Right now, as far the state goes, they're saying about six out of 10 Americans are still planning a trip by car, truck, or an SUV this summer. It won't change their travel plans. The additional increases in the price of gasoline, according to the Travel Industry Association, they do a lot surveys regarding this; they're saying that people may feel poorer, but they're still planning longer trips. They're being real particular about where they are going. I think where we're seeing the change isn't so much that people are still taking the trips, they're still coming and spending on hotel rooms, eating out, they're walking in the downtown areas, but I think who is really being affected are our retailers. They have a little bit less in their pocket to spend. They're spending a little bit more on gas. They are not buying some things, I think, they would have taken home before. I think the change is more in retail in the structure of what they're spending it on, not necessarily in who is coming."

Visitation from Europe, Eastman-Liddle said, is up this year.

"The Visitor Center is seeing that (and) I think the canyon is seeing that in a big way as well," she said. "We're not seeing a deterrent in the numbers that are coming, so much as we're seeing in how they're spending their money when they get here."