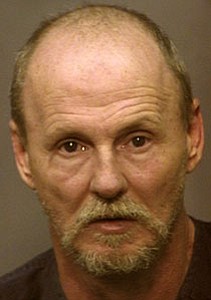 Ash Fork residents are reeling over the recent arrest of two local residents in relation to alleged sex crimes performed against children in the area. Fifty-one-year-old Donald Leacock was taken into custody March 1 and charged with 10 counts of sexual exploitation of a minor. Ash Fork resident Howard Leventhal was also arrested in connection with the case. A third suspect, Richard Rush, was arrested May 9 in Talkeetna, Alaska, in connection with the case. A fourth suspect, according to a press release issued by the Coconino County Sheriff's Office, is deceased. Deputies from the Coconino County Sheriff's Office said they are seeking additional suspects in the case as well.

Sheriff deputies became involved in the alleged sex ring in late February when they responded to a civil standby request from a 14-year-old white female who asked deputies to assist her in moving out of a residence in Kaibab Estates West, located north of Ash Fork.

Further investigation revealed that Leacock would post nude pictures of his wife on the Internet and arrange meetings between other individuals and his wife. A number of the nude pictures, according to the Coconino County Sheriff's Office press release, were taken as early as three years ago, when Leacock's wife was 13-years-old.

After an investigation by Coconino County Sheriff's Deputies, Child Protective Services and the Safe Child Center of Northern Arizona, Leacock's wife was removed from the residence. A number of computers and laptops were also seized during the investigation in both Ash Fork and Phoenix, where Leacock lived prior to his move to northern Arizona. According to reports, a number of photos and movies of suspected child pornography were recovered from the devices. Leacock moved to Arizona with his wife from St. Louis, Mo.

Leacock was convicted March 13 by a Coconino County Grand Jury on 24 counts of sexual exploitation of a minor. Leacock could face 10 to 24 years for each count. The minors involved in the case have been removed to safe locations, according to law enforcement officials.

Residents in Ash Fork, meanwhile, are upset this happened in their area.

Long time Ash Fork resident Fayrene Hume said that people in the community were "saddened" by the news concerning Leacock's activities in the Ash Fork area.

"I can tell you that everybody is so sad about it," Hume said. "The community is very, very upset about that, because these things shouldn't happen."

Leacock's wife, a student at Ash Fork High School, initially came under suspicion by school administrators when it came to light that she was married, according to Ash Fork Superintendent Gary Spiker.

"Basically, what I can say about it is I was concerned," Spiker said, adding that school officials checked with the proper authorities to verify whether she was truly married to Leacock.

"There was a marriage license from another state," Spiker said.

While there has been little talk of the incident with students in Ash Fork, Spiker said counselors from the area, as well as surrounding areas such as Williams, are ready to help should the need arise.

"There isn't a lot of talk about it. There hasn't been a lot of discussion. We have some counselors, our nurse that's a counselor, is available," Spiker said. "Tom McCraley (Williams Unified School District Superintendent) said they would be glad to help."