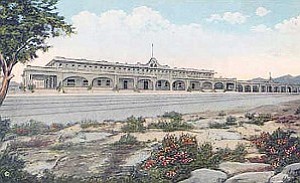 The Escalante — a Fred Harvey restaurant — sits elegantly during its glory days. Pictures of the Escalante can be seen at the Ash Fork Historical Museum.<br> File/WGCN

Will Rogers once said:

"Everyone has deep in their heart, the old town or community where they first went barefooted, got their first lickin', traded for their first pocketknife, grew up and finally went away thinking they were too big for that burg ... but that's where your heart is."

According to Marshal Trimble, Arizona State Historian who grew up in Ash Fork, and residents, Ash Fork is just that type of town.

Ash Fork, Arizona, located 15 miles west of Williams, is included in that famous stretch of road known as Route 66. A section of "Ole Route 66" goes through the town of Ash Fork and can be picked up five miles west of town (Exit 139 - Crookton Road).

Congress commissioned the southwest's first federally funded interstate road to be built through the heart of the new lands to California in 1857. Edward Beale, a retired Navy Lieutenant, was chosen to chart this road. This 10-foot tract, which allowed wagons to pass, can be found north of Ash Fork near Russell's Tank. Visitors can retrace Beale's steps as they linger over a picnic lunch. Russell's Tank was a popular stop for pioneers along the Beale Road because of its cool, clear water and plentiful wildlife.

In 1881, construction began on the transcontinental railroad across northern Arizona. Ash Fork was founded in 1882 with the arrival of the Atlantic and Pacific Railroad.

The railroad also brought the Fred Harvey restaurant, Escalante, to Ash Fork in 1907. The Escalante was torn down in the early 1970's. Many pictures of this beautiful Harvey House can be found in the Ash Fork Historical Museum.

With the railroad, came the cattle business to Ash Fork. Ash Fork Livestock Company, one of the largest ranches in northern Arizona, is now known as Juniperwood Ranch and still has descendants of this cattle company living in Ash Fork.

Another business spearheaded from the railroad industry was the stone industry. Flagstone was quarried for the railroad to build bridges and private industry began shipping stone for public buildings, churches and office buildings. Visitors can see first-hand the end results of this beautiful stone in the many buildings found in and around Ash Fork including the registered historic ADOT building, which houses the Ash Fork Historical Museum. Sandstone art can be found, too, like the Kachina found on the old "Gummie's Bar & Restaurant" on Lewis Avenue.

Take a step back in time when you visit the Ash Fork Historical Society's Museum. Inside you will find stories of Ash Fork's first settlers, historic photos, artifacts and exhibits of Ash Fork's colorful past. We welcome tour groups and have bus parking.