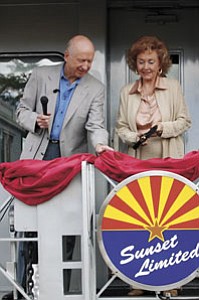 Max and Thelma Biegert prepare to cut the ribbon prior to the inaugural run of the Sunset Limited in September 2006.

Max and Thelma Biegert, entrepreneurs and preservationists of the Grand Canyon Railway, have been inducted into the National Railroad Hall of Fame. They are honored for their dedication to preserving the historic Grand Canyon Railway in Williams, turning an abandoned and lifeless property into a viable line carrying tourists from Williams to the South Rim of the Grand Canyon, according to Bob Bondi, founder and president emeritus of the Hall of Fame.

The Biegerts began restoring the GCR in the mid-1980s and successfully restored railway service to the line on Sept. 17, 1989,m exactly 88 years after the first passenger train ran on the line. Using restored steam and vintage diesel engines along with classic coaches, GCR carries more than 230,000 people to Grand Canyon National Park each year, dramatically relieving congestion in the park.

The National Railroad Hall of Fame honors the men and women who built the rails through annual inductions of noteworthy individuals in three categories - Birth and Development Era, 1800-1865; Golden Era, 1866-1945; and Modern Era, 1946-present. The Hall of Fame is located in Galesburg, Ill., by designation of the United States Congress.

GCR was the lifeline to Grand Canyon National Park in the early 20th century. The first train ran on Sept. 17, 1091, connecting Williams to the Santa Fe to give tourists a direct route from Chicago to the east and Los Angeles to the west. Competition from the automobile - spurred by completion of the interstate highway system - and the airplane contrived to kill the line.

Passenger service to Grand Canyon National Park stopped in 1968 and the line fell into disrepair. Max and Thelma Biegert reopened GCR two decades after it closed, restoring and rebuilding key structures, including hotels and the historic depot in Williams.