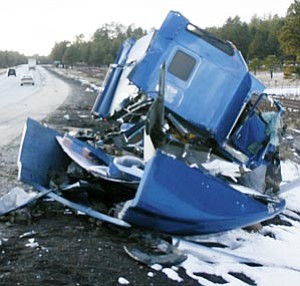 Cleanup continues on Interstate 40 from the 139-car pileup that took the life of Williams resident Shelly Molina on March 16. Molina was 56-years-old. Seventy-seven-year-old Bernard Heinrich also died in the accident. Over 50 injuries were reported as a result of the massive pileup, thought to be one of the worst accidents in northern Arizona history.

The accident occurred shortly after noon March 16 in a location near A-1 Mountain Road just west of Flagstaff. Accidents were reported in both the east and westbound lanes. Officials blamed slick roads and whiteout conditions for contributing to the massive accident. The eastbound lanes re-opened at 2:45 a.m. and the westbound lanes re-opened at 4:50 a.m. March 17. DPS officials recommended that drivers use extreme care when traveling on the roadways today and obey safe distances when behind other vehicles.

A number of Williams emergency response teams assisted in the massive accident, including members of the Williams Volunteer Fire Department. Officials at the Williams Health Care Center received the call at roughly 2 p.m. that victims would be arriving in Williams from the crash scene. While medical personnel were told to expect roughly 20 patients, far less than that were actually brought in to Williams, according to Williams Health Care Center manager Cindy Christman.

"We saw seven people, seven patients from the accident," Christman said. "They were transported here by ambulance. Six of them were treated and released for minor injuries, and we had one patient that was transferred to Yavapai Regional Medical Center. We called in extra staff to help handle that. We called in about a dozen staff members on their day off."

While emergency personnel are trained to handle emergency situations, Christman said it is almost impossible to be prepared for accidents when they occur.

"The initial call came through - that we were going to see 20 to 30, but we only got seven. We just start down our emergency phone list and start calling people in," Christman said. "I think Flagstaff Medical Center was overwhelmed with all the injuries. It's nice that we could take some of that off of Flagstaff."