Our search for water cannot come to an end 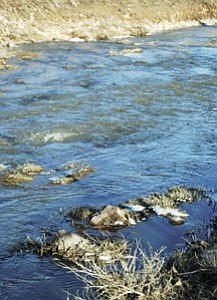 Last week local voters participated in one of the most confusing city council elections in Williams' history. Voters re-elected Dr. James Wurgler, and challenger Frank McNelly was a favorite of the voters, securing the highest number of votes for a council seat. It remains unknown if Councilman John Moore is indeed Williams' next mayor or if Vice Mayor Bernie Hiemenz will retain his council seat. Legal counsel is examining election results to determine if a general election is necessary.

We commend all the men that ran in the election and congratulate the winners. Tension is high at city hall. However, we cannot let local politics interfere with our search for water.

The Williams City Council certainly has their work cut out for them until we locate additional sources of water. Now more than ever, we must find an abundant supply of water. If we fail, the future of our community is at stake. Without water, Williams cannot grow and may not be able to even meet our current needs should an extremely dry year reoccur.

It is unbelievable that we can drive four short miles outside of Williams, drill wells and then find out that the water does not belong to us, but to communities nearly 100 miles away. Water rights for the city's Dogtown I and III wells were brought into question several weeks ago, after Williams officials discovered a location error concerning their wells while in negotiations to procure additional water sources. According to officials, water from the wells are being pulled from the Verde River Basin, which technically does not belong to the city of Williams, but to communities in the Verde Valley area. The search for water has, to date, cost the city over $13 million.

Williams officials have met with the Department of Water Resources, who sent them to meet with representatives from the Salt River Project late last summer. State Representative Lucy Mason, along with Williams Mayor Ken Edes and Williams City Manager Dennis Wells, introduced House Bill 2772 during a meeting of the Water and Agricultural Sub-Committee March 6. The bill, should it be passed in the state legislature, would transfer a small portion of the Dogtown I and III water rights from the Verde River Basin to the Coconino Plateau Basin. If state legislators do not pass the bill, the Dogtown wells may face closure. The bill is expected to go before the state legislature by June at the latest.

Yes, we've already spent more than $13 million in our search for water. But we can't give up now. It is our hope that the Williams City Council continues to make finding water a priority. We do have five reservoirs - most of which are full right now - we rely on for the majority of our water. This year we received an abundance of moisture, but it is unlikely this will last forever. We are still in the midst of a drought. We must be prepared.