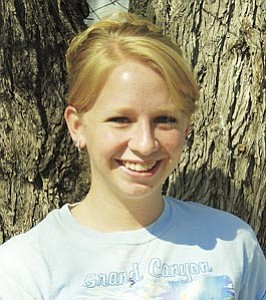 Twenty-year-old Konstance Brooks is the new Miss Route 66 for Williams. Brooks, who was 19 when she entered the contest, was first runner up in last year's pageant and has taken over from 2007 winner Carole Braden, who is no longer able to fulfill her duties. Six young women participated in last year's event. Brooks was presented with the crown and sash in a private ceremony held last month.

Brooks currently attends Coconino Community College. Born in Kingman, she moved to the Williams area when she was 12. She has worked at Pine Country Restaurant for six years. Brooks works with her mother and her brother at the local business, while her dad works for the Grand Canyon Railway.

She said she had no plan to enter the pageant originally.

"I actually had no intention of doing it at all until April from the APS office came into Pine Country one day and asked me about it," Brooks said. "She said I'd be perfect for it and said it's a lot of fun. It was really fun. It was a lot different than I thought it would be and it was a little bit of work, but it was still really fun. It kind of quizzed me on Route 66 stuff. I lived in Kingman and I had no idea it was part of Route 66. I moved here and everything is about Route 66. People ask me about it all the time. Where's Route 66? Where does it originate? It's kind of cool, because the competition gave you a whole long list of questions and answers to remember and it's kind of helped me at work, because people ask me how many states it goes through, stuff like that."

For Brooks, being Miss Route 66 is a lot of fun.

"I got first runner up, but I actually get to be it now," Brooks said. "I didn't really want the spotlight, I just wanted to compete and have fun. It's just an experience that I can put down and say, 'I've done this,' but it's kind of nice that I actually get to do it now."

Brooks will present the crown to the new Miss Route 66 during this year's pageant, scheduled for later this year. She recommended that future contestants for the crown work on their personal interviews prior to the pageant.

According to pageant organizer Diana Croteau, moving the pageant to August will give Brooks some added time to wear the crown. Last year's pageant was held March 30.

"The committee has decided to postpone the event this year - move it to August 15," Croteau said. "We've been talking about this for quite some time, to move the event and coordinate it with the Cool Country Cruise-in to get more participation. The dates that we have it now there's conflict with the girls' school and everything. Most of the girls are very involved in sports and different activities at the school, so this will be right at the beginning of the school year, if school has even started by then. I think it will make it easier on the girls. We'll have more participation, and it will coincide with an event here, so it will make it a little more special."

Croteau added that holding the event later in the year would also help the organization find additional sponsorships.

"The committee feels that maybe holding it in August, we'll get more support from sponsorships, because businesses will be in their peak season. That's another reason we postponed it. Number one was participants and number two was sponsorships. We had talked about doing this last year, but the timing wasn't right. This will give (Brooks) some time to represent Williams in addition."

Due to age limits, Croteau said that Brooks would be unable to compete in the upcoming Miss Historic Route 66 pageant held each year in Seligman.

"We will not have anybody in the historic pageant this year, unfortunately, because Konnie is over the age limit for that, so it will be '09 that we have somebody representing Williams," Croteau said, adding that she has extended the date for girls to enter the Williams pageant.

"We'll go ahead and keep promoting entries on it and sponsorships," Croteau said.