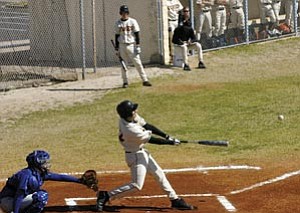 The WIlliams High School Vikings took in some great wins during the Cougar Classic tournament held in Laughlin, Nevada March 7-8.

The season is off to a roaring start for the Williams Vikings, who sit at five wins and one loss for the season as of March 10. It was all wins for the strong Vikings team when they played recently in the annual Laughlin Tournament. The Vikes began their season with a scrimmage game against Camp Verde Feb. 21.

"We got some good competition down there in Camp Verde. That was our first day outside, when we scrimmaged Camp Verde, due to the weather we've had," Coach Phillip Echeverria said.

The Vikes went on to play their first regular game against Salome Feb. 25, taking the win with a final score of Williams 12, Salome 2.

"That was our second day outside. We came out and did a decent job," Echeverria said.

From there the Vikes took on Sedona, where they lost to the scrappy Sedona team with a final score of Sedona 10, Williams 1.

"Sedona is a good ball team and they're young like we are, it was a three to one ball game going into the fifth and we ended up losing," Echeverria said. "I was a little discouraged in our attitude at that ball game. We made some adjustments come Wednesday's practice, kind of our first official practice outside and we did some things at that practice that, I think, turned some lights on for some kids, maybe for our entire team. We've been talking team atmosphere and playing together as a team and not worrying about 'me' as an individual. I think the boys have finally caught on to that and we saw a little of that at the Laughlin Tournament this past weekend."

The Vikings opened the Laughlin Tournament March 7 with their first match against Laughlin High School, where the Vikes took the win with a final score of Williams 15, Laughlin 12. The Vikes returned to the field later that same day to take on Lake Meade Christian Academy, again taking the win as well, with an ending score of Williams 5, Lake Meade 0.

"They had some good kids on that team," Echeverria said. "We played an outstanding game there."

Williams carried their winning streak over when they returned for another set of games March 8. The Vikes played Wells to start off the day's events, winning the game with an ending score of Williams 5, Wells 2. The Williams boys took on Round Mountain following their victory over Wells, scoring yet another win with a final score of Williams 18, Round Mountain 0.

"What I was most proud of was our effort as a team and I'm seeing a bunch of kids that are going out there and playing together to get a victory and to represent our school, our community, themselves and their families in a positive light," Echeverria said. "Like I said, I think some light bulbs have turned on for our kids and I'm looking forward to the rest of the season and to see what steps we need to take to continue to move forward. I think we took two big strides forward over the weekend. I'm real proud of the kids as a group."

Echeverria said he did not plan to mention individual players when he speaks about the Vikings baseball team in order for the players to operate as a whole.

"I'm just going to talk about team, team stats, we're five and one as a team right now," Echeverria said. "If people in the community would like to see some individual stats or see how the kids are doing, they are more than welcome to go to the Web site that I post all my stats on. They can look up individual stats there."

The Web site, Echeverria said, is located online at www.maxpreps.com.

"I want to push the team concept. I've been preaching that for a year and a half and, I think, the majority of the kids have caught on and the few stragglers are starting to catch on to what myself and my coaching staff have been preaching to them and I'm excited for our opportunities this year. When we open up our conference schedule this year, there'll be no regional tournament, so every region game is an important game."

After taking on Joe City yesterday, the Vikes will head for Rock Point tomorrow for some exciting double-header action.

"That will start up our conference - our region schedule," Echeverria said. "Each game is kind of like a region tournament game, because there is no tournament. Bagdad is probably one of the top teams in the 1A conference, so we'll see where we're at when we play Bagdad on March 19.

"I'm impressed with the way our pitchers are throwing and I'm impressed at our hitters. They really swung the bat well this weekend and we just need to continue to get better," Echeverria said.