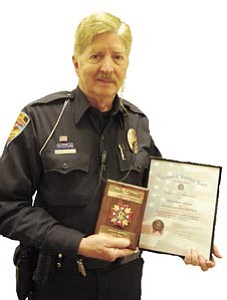 Bob McCarty displays his awards after he is named Williams Officer of the Year by the Flagstaff Veterans of Foreign Wars of the United States.

Flagstaff's Veterans of Foreign Wars (VFW), San Francisco Peaks Post 1709, named Williams Police Officer Bob McCarty as one of their 2008 awards recipients recently during the group's annual awards banquet. McCarty, who serves as the school resource officer for the Williams Unified School District, is a familiar face to students in the Williams area. Five northern Arizona law enforcement officers were given the prestigious award altogether.

"He was nominated for the award because of his work at the school," Nixon said. "We're proud of him for it."

Over 100 individuals attended the banquet, including families of those who were given awards. Besides law enforcement officials, other award recipients included student winners of the Patriots Pen Award and recipients of the Voice of Democracy Award, Teacher of the Year and Veteran of the Year. Pepsi was honored with the Business of the Year Award.

"There was a supervisor from each department there to make the presentation. It's their annual awards banquet for citizens and officers and a few veterans. They gave the Veterans Award there for the year as well," McCarty said. "It was a big steak dinner and it was hosted by Bashas' - Bashas' provided the steaks and a Girl Scout troup did the serving. There were perhaps 100 or more people there, families of the officers who were honored and the other citizens that were honored."

Award recipients were given plaques and certificates as well as dinner. Student winners, McCarty said, were also awarded cash prizes by way of scholarships.

McCarty has been with the Williams Police Department since 2003. He is currently the School Resource Officers for the Williams Unified School District. He moved to the Williams area in January of 2001 and currently lives in Parks. Besides his duties with schools in Williams, McCarty is also the firearms and taser instructor for the WPD.

"A School Resource Officer is grant (funded). It's called the state's Safe Schools Act. It puts police officers in schools. The requirement is that you teach 90-hours a semester and you enforce the law in the schools, take all the case reports, be a role model for the students and aid in their extra-curricular activities like prom and Halloween parties and stuff like that. It's a full time job in the schools. In the case of Arizona, we have 320 or so SROs in Arizona schools. Williams has one for all the students here. Some schools have one for each: elementary, middle and high. Phoenix PD has about 98 or something, almost 100 officers in their school districts. A number of small towns like Winslow, Holbrook and Snowflake have an SRO. Flagstaff doesn't have any. It all had to do with when the money first became available, you had to have grant writers write a grant and it got accepted for our district. Then you have to keep meeting the requirements. In the past, once you had gotten the grant and kept up with the terms, they kept it going. Starting next year, it's going to become a competitive thing. Every three years you have to compete. They're not going to raise the money. What it may mean is that they won't have any SROs in certain schools where they've got them now. New schools will get an SRO that didn't have them before, so we're in the competitive process right now of trying to get ours extended again."

McCarty teaches juniors and seniors at the high school and sixth graders at the middle school in Williams. He also instructs a second through fifth grade after hours program among other duties.

"Basically I'm teaching all the kids at one time or another," he said. "I really like the job. It's great dealing with the kids and I think I'm having an impact. They refer to me as 'Officer Bob.'"