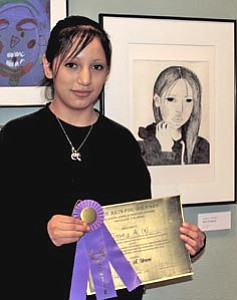 Ninth-grader Josey Araiza, with her self-portrait, which was named Best of Show at the opening of the Arts for Our Park student exhibit at Kolb Studio. More than 100 student works are on display through March in recognition of Student Art Month.

About 100 pieces of student art were unveiled last week at the opening of the fifth annual Arts for Our Park exhibit at Kolb Studio.

The juried show is sponsored by the Park Service, Grand Canyon Association and Grand Canyon School. It will be up through March in celebration of National Student Art Month.

Art teacher Amy McBroom and Pam Frazier of GCA planned and prepared the exhibit, which opened with a reception Wednesday, food provided by the school's culinary arts program.

The theme is The Face of Our World.

"We see many kinds of faces around us at the Grand Canyon," the theme statement noted. "Millions of visitors come from all over the world. New people move into our community and become facets of our school, neighborhood, and homes. We recognize the faces in buildings, land formations, animals, and people around us. These exposures give us new perspectives and add to the memories we make daily."

About 500 pieces were submitted. Judges were Deb Goepfrich, Richard Chalfant and Caroline Williams.

"We reached our decision on each piece through consensus based upon the following criteria: adherence to the exhibition's theme, elements of design, attention to detail, workmanship, and creative thought exhibited. We were admittedly subjective throughout the process - art is difficult to judge strictly by numbers - but we spent considerable time discussing, evaluating, and finally agreeing on all of our decisions," they wrote in their statement.

Judges said that based on her piece, she looked like a person they would have wanted to meet.

Jose Jaime, also a freshman, received the Superintendent's Award for his work, "Within Me."

This award, a $50 cash prize, is selected by the superintendents of the school, Albright Training Center and the park or one of their representatives.

Frazier, who has been with the project since its kickoff in 2003, said she's impressed with the work every year.

"It gets better and there's always a different side to how the kids express themselves," she said.

School Superintendent Sheila Breen first presented the idea to Frazier in August of 2003. They talked about a student show to fill a gap in the exhibition schedule and moved forward to have the first competition that December. They then brought McBroom, and Jacob Fillion of the Park Service on board.

McBroom said that after that first exhibit, they changed to March to coincide with Student Art Month.

Planning starts in September when the committee meets to discuss a theme and set dates. McBroom works with students throughout the year to produce projects in keeping with the theme.

"This year's Faces of Our World also influenced my teaching with using portraiture across the board," McBroom said. "We looked at full face, profile and three-quarter profiles as well. We looked at the face of the land, animals, palnts as well as places and people."

Some high school students worked on full-face portraits in pen and ink, using handmade pens and quills and working in a saying with which they identified into their portraits. Others did sillhouette self-portraits in mixed media.

"The resolve of the students (was) to not merely create but communicate a sense of who they are behind the face," said McBroom.